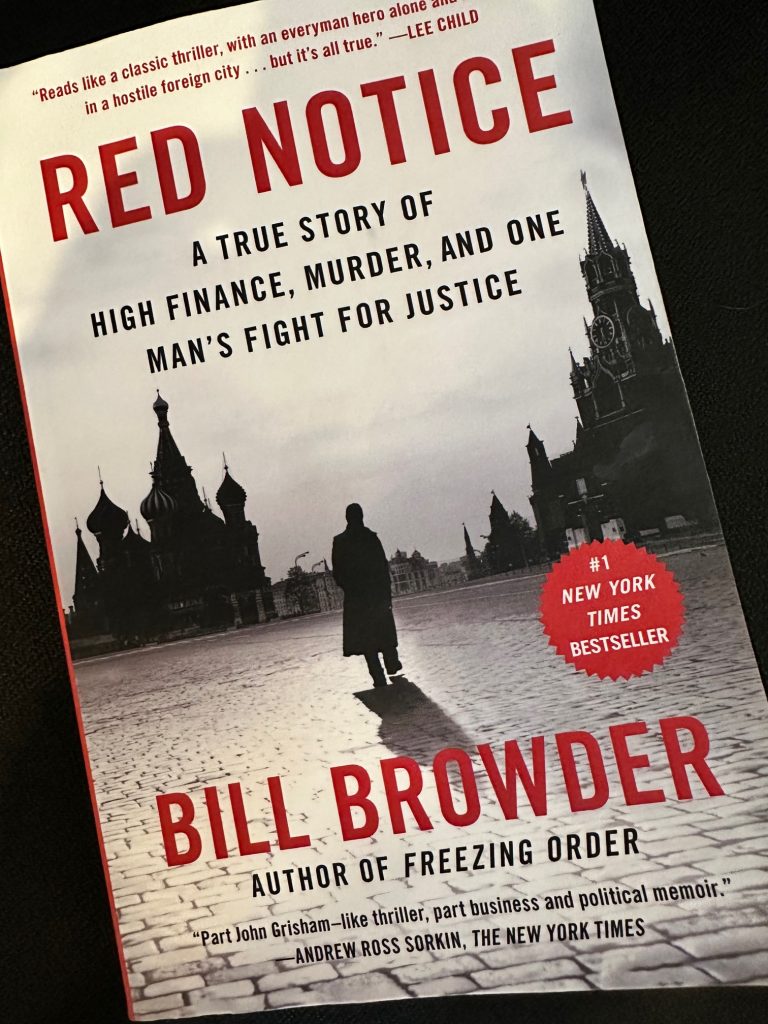 When my well-read mother and equally well-read friend both recommended Red Notice, I had my doubts. I didn’t doubt whether the New York Times bestseller would be well-written, but I did wonder if it would hold my interest. A book about an American financier whose dealings in Russia turn to murder? Eh – not my thing, or so I thought.

Equally intense and informative, Bill Browder’s Red Notice begins with a Russian glimpse and then with a bit of his family history. He then goes on to talk about his acceptance to the University of Colorado, Boulder and subsequent degrees from the University of Chicago and Stanford. Next, Browder details his tough road getting into the cutthroat finance world, starting with a rejection from JP Morgan. He ultimately lands at Boston Consulting Group and his career brings him to Poland and subsequently Russia, where he is the first to do a lot in terms of high-profile finance. Next is Salomon Brothers, after which he creates his own investment firm called Hermitage Capital.

Upon entering Russia, Browder learns quickly that the country’s communism “destroyed the work ethic of an entire nation” and that anyone who shows the “slightest bit of personal initiative” is severely punished. Obviously what’s going on in Russia right now is awful, but the details in this book are next level. “[Russia] was a lawless society where anything could happen, and where anything often did happen.” In chapter 18, Browder is expelled from Russia for getting rid of one of the country’s nastiest oligarchs (essentially being punished for doing something good) and it’s frightening that Putin still has that power.

By chapter 22, Browder is ready to get out of Russia – a big shift in his thought process considering his professional finance background and subsequent success hinges on the ground he breaks by going to Russia in the first place. In the middle of this chapter, photos appear of Browder and his family, President Barak Obama, Putin, Sergei Magnitsky and his family, etc. While I understand that many books feature photos in the center for layout purposes, at this point the reader hasn’t met Sergei yet (that happens in chapter 23) so all of this information is given too early. Before I’m even introduced to Sergei, I’m presented with a photo and caption showing the Sergei Magnitsky Rule of Law Accountability being signed by Obama.

I wish the photos were inserted about 60 pages later because chapter 23 is where the story really starts reading like a thriller. A horrifying thriller, but a thriller, nonetheless. Browder’s offices are raided by a group called FSB (a Russian counterintelligence agency) that “doesn’t just issue arrest warrants and extradition requests – it dispatches assassins.” Unjust doesn’t begin to describe this lawless scenario. At the end of chapter 24, Sergei is quoted saying, “Russian stories never have happy endings” and, as the reader later finds out, there are no truer, more horrendous words.

The rest of the book is equally hard to put down and hard to read because the corruption, abuse, torture, lies, and absolute lawlessness is unimaginable. Unimaginable. Chapter 29 through the rest of the book details the agonizing story of Sergei and what Browder and his team do to achieve a bit of posthumous justice. The cruelty Sergei endures as an innocent man is so insane it is difficult to read, nevermind write about after reading what took place. Furthermore, the lack of humanity shown to a man who did nothing wrong, was a good person, and had a loving family at home is excruciating. “Sergei Magnitsky was killed for his ideals. He was killed because he believed in the law. He was killed because he loved his people, and because he loved Russia. He was thirty-seven years old.”

One positive note is the roles the media and YouTube play in finding some justice for Sergei. “In any major crisis, what you do in the first few hours defines it forever…We hit send, hoping and praying that this time people would care. And this time, everyone did.” Through their tireless efforts, Browder and his team get senators involved and, as a result, “what started out as a bill about Sergei morphed into a historic piece of global human rights legislation.” It takes three years, but Browder’s relentless efforts make the Magnitsky Act a reality. What a win for Sergei’s family. “Sergei’s story has given everyone in Russia, as well as millions of people around the world, a detailed picture of the true brutality of Vladimir Putin’s regime.” It also gave me a clearer understanding of the dreadful actions Putin is willing to take to get what he wants.

So do I recommend this book? Yes because it’s extremely well-written and I learned a lot, but it does take time to gather steam. Those who are fascinated by finance will not be able to put the book down from the beginning but it might take others (like me) a few chapters to get into the story’s rhythm. Either way, after finishing Red Notice, the reader will walk away more informed, horrified by the details of what goes on in Russia, and more grateful than ever for their loving families.