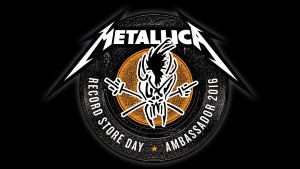 Although I find all the of the Facebook “days” fun – Wine Day, Woman’s Day, Sibling’s Day, etc. – there is something to be said about a sanctioned day that celebrates music. So clearly I enjoy Record Store Day the most. Since 2008, Record Store Day has been commemorating the unparalleled culture of what it means to respect, admire, and love independently owned record stores. Thanks to the efforts of many, there are stores participating in Record Store Day on every continent except Antarctica. (Get it together Antarctica)! Additionally, cities across the United States, including New York, Los Angeles, Boise, Charleston, and Las Vegas, have declared the day an official holiday.

There is no question that Record Store Day’s biggest supporters are the members of Metallica as they have been known to perform, sign autographs, and host meet-and-greets at stores around the world. Other Ambassadors have included Jesse “Boots Electric” Hughes (Eagles of Death Metal), Joshua Homme (Them Crooked Vultures, Queens of the Stone Age), Ozzy Osbourne, Iggy Pop, Jack White, Chuck D, and Dave Grohl. In 2013, the organizers of Record Store Day accepted the Independent Spirit Award from NARM (now the Music Biz Association). In 2015, Record Store Day was named the Marketplace Ally of the Year by A2IM, an organization of independent music labels.

In addition to celebrating the tradition of record stores, Record Store Day also means the public having the opportunity to buy never-before-released titles on both vinyl and CD. In 2008 a few list titles were released on Record Store Day and over the years that list has grown to include artists and labels across every size, genre, and price point. Here are the highlights of this year’s releases which are available exclusively at independent record stores on April 16:

-David Bowie “TVC 15” and The Man Who Sold the World on picture disc.

-Patti Smith’s Horses Live Electric Lady Studios, a new live version of the classic album, which was recorded in the same studio as the original.

-Florence + the Machine’s “Delilah / Only Love Can Break Your Heart.”

-Outkast’s “Elevators (Me & You),” reissued on “glow-in-the-dark alien vinyl” to commemorate the 20th anniversary of ATLiens.

-The Runaways’ single “Right Now/Black Leather” will be re-released on cherry-red vinyl.

While it’s exciting that so many significant artists use Record Store Day as a platform to dig deep into their archives, creatively release old material, or bring back songs/albums that have been out of print for decades, I think the day is most important because it keeps a big part of music history alive. At this point the next generation is already too young to really understand what buying music and spending time in a record store really means. As a result, Record Store Day functions as a way to ensure that record stores remain a part of the cultural lexicon. Gone are the days of spending hours thumbing through vinyl, tapes, and CDs in search of the album that a person can’t get out od their head– the album they just have to have. So this day reminds everyone that those memories must be preserved and passed on. Although most of us now get our music online, I’ll be surprised if in 2026 there is a day called “Online Streaming Day.”

See you at Eagle Valley Music in Minturn on April 16!