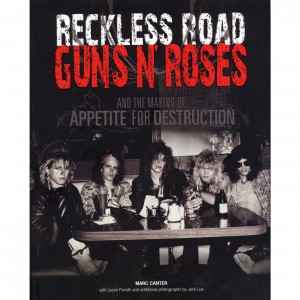 When I first saw the title of Marc Canter’s book – Reckless Road: Guns N’ Roses and the making of Appetite For Destruction – I was really excited.   I couldn’t wait to read all about the creation of one of my favorite records of all time; an album so good that as of September 2008 it had been certified 18 times platinum by the RIAA, accumulating worldwide sales in excess of 28 million as of October 2008.  Appetite is also the best-selling debut album of all-time, beating Boston’s debut album Boston, which has gone 17 times platinum.

Released in July 1987 on Geffen Records, people couldn’t help but notice one of the rawest, ballsiest and most aggressive albums of all time.  In 1989 Rolling Stone ranked Appetite for Destruction as the 20th best album of the 1980s.  The magazine later ranked it at 61 on their list of the “500 Greatest Albums of All Time.”  In 2003, VH1 named Appetite for Destruction the 42nd Greatest Album of All Time.    It was also rated number 18 in SPIN magazine’s “100 Greatest Albums, 1985-2005.”

So as I was saying before, I couldn’t wait to read the story behind Appetite and I figured Canter’s book would be it.  Unfortunately Reckless Road wasn’t as good as I thought it was going to be but there were some interesting parts.

-The photos are awesome.  The photographers clearly had all access to Guns N’ Roses, as the reader can literally see every detail of the band members in the performance shots.  Every tear in Axl’s jeans, the color of Slash’s nail polish, Duff McKagan’s bass strings, Steven Adler’s huge hair, every piece of jewelry Izzy Stradlin wore and most importantly the look on their faces as they tore through some of the best rock and roll the 80s had to offer.

-Canter says that he “wants the reader to feel the flow of the live shows” and that is exactly what it feels like.  Canter even provides a play-by-play of what was said by the band at the 50-plus performances Canter attended – something that could only be given to the reader by a person who was there.

-The tickets and the concert posters are very cool to see – Guns playing at now legendary Sunset Strip venues like the Whiskey, the Roxy and the Troubadour- and seeing those items in the book make me wish even more that I was there.

-A lot of what was said at the shows is very repetitive.  Makes sense for their individual performances but reading them all together in one collection gets old quickly.

-Being the pain in the ass that he is, Axl of course did not contribute to this book so we don’t have anything new from his perspective.

-A lot of what I read in this book I had already heard on VH1 specials, biographies and documentaries.

-Although the book was presented chronologically at times I felt that it was disorganized.  For example, the comments from band members and external players were jumbled together when I think they would have been more effective if they weren’t.

Regardless of the negatives of this book I can’t reiterate enough how great the photos are – they show exactly why Guns N’ Roses is so notorious.  If you haven’t seen live footage of Axl performing, these photos do a good job of demonstrating why he is regarded as one of the best rock and roll front men of all time.  He is constantly in motion, back-bending and slithering his way across the stage; it’s as if Axl and the microphone merge into one.  Also, the photos of the scantily-clad women that flocked to this band like moths to a very glittery flame are hysterical.   The black leather leotards, thongs, leopard skin, big belts – it’s so unbelievably 80s.

But at the end of the day it’s the music that matters.  Appetite For Destruction featured so many Guns classics that it might as well have been a greatest hits album: “Welcome to the Jungle,” “Paradise City” and “Sweet Child O’ Mine” are all on this record along with other gems like “It’s So Easy,” “Mr. Brownstone” and “Rocket Queen.”

Canter gives us more set lists and on-stage chatter than the real making of the album which is what I was expecting/hoping for.  That being said, it would be great to hear live versions of the band covering “Heartbreak Hotel” and “Jumpin’ Jack Flash,” both of which Canter got to see numerous times.

I’m glad I read Reckless Road but I’m hoping that the next time Canter writes something about the band that gave him a front row seat to their climb from good to legendary he offers more of the authentic, raw and exceptional details that would make a real page-turner.