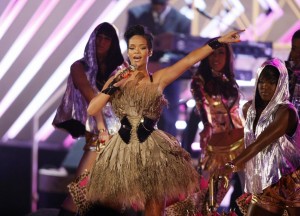 -Since releasing her first single “Pon de Replay” at age 17, Rihanna has put out five albums in six years.

-Rihanna has sold more than 15 million albums and 45 million singles making her one of the best-selling artists of all time.

-18 of her songs have reached the top 10 on the Billboard charts.

-Among female performers only Whitney, Madonna, Janet and Mariah have more than her.

-If her latest single “S&M” tops the charts it could be her tenth number one hit which is more than Beyoncé and Lady Gaga combined.

-Rihanna has achieved more number one singles on the Billboard Hot 100 in a six-year time span which is the most by any artist in that time span.

A few of her singles you may recognize:

“Shut Up and Drive”

These songs were hits – most likely due to Rihanna lending her voice to the hook:

“Love the Way You Lie” (Eminem)

In addition to her undeniable talent, it is clear from this quote that her management knows what they are doing:

“It’s not the music industry anymore,” says Rihanna’s manager Jay Brown. “It’s the entertainment industry.  The goal is not just to be an artist, it’s to be a brand.”