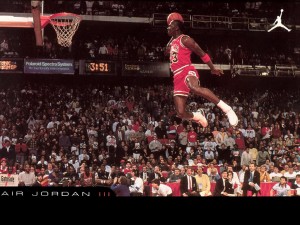 What the hell does Michael Jordan have to prove? Considered the greatest player in NBA history, Jordan led the Chicago Bulls to six championships. In 1999, he was named the greatest North American athlete of the 20th century by ESPN and was second to Babe Ruth on the AP’s list of athletes of the century. He was inducted into the Basketball Hall of Fame in 2009.

So why, in an interview about a new video game, would he spend his time discussing a shit-talking high school player, how current players couldn’t compete with him in his prime because it was a much more physical game back in the day and how Kobe Bryant stole all his moves? What is he trying to prove and why does he think he needs to prove anything? As explosive as Bryant was in his prime and as amazing as D-Wade and LeBron are now, there is no question that Michael Jordan is the best player that ever lived. He knows it and we know it so why is he reminding us at age 50?

The platform for this interview was a promotional video for the NBA 2K14 game (released two days ago) and includes Jordan saying he could have beaten LeBron James in a one-on-one game in his prime. Jordan also reveals a long list of past and present NBA players whom he would have liked to have played one-on-one including Jerry West, Elgin Baylor, Julius Erving, Carmelo Anthony, Dwyane Wade, Kobe Bryant and James.

Jordan has promoted 2K Sports since 2011, when he first appeared on the cover of the popular game. He shared the cover in 2012 with Magic Johnson and Larry Bird. James appears on the cover of this year’s NBA 2K14 game for the first time.

That is unbelievable. Not only is Jordan the most decorated NBA player of all time, but he also knew how to separate himself from the other players that were in the sport at the time. There is no question that he’s the best but he should probably let others say it and keep his mouth shut.

Meanwhile, if you’re wondering about James’s reaction: “MJ said that? I’ve thought about the matchup, but no one will ever see it and it’s not going to happen,” James said Tuesday after the Miami Heat’s training camp practice. “It’s good for people to talk about.”

Nice quote LeBron – better to keep it short and sweet.