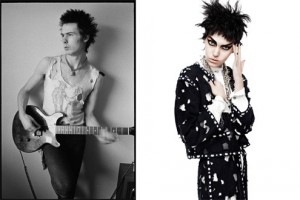 I love how rock & roll, punk, leather and rebellion – all aspects that used to be considered anti-establishment and a pain in the ass – have become subjects of exhibits in major museums. On November 9, 2012, I wrote about Seattle’s “Worn to be Wild” exhibit which was showcased at the EMP Museum. Today I’m writing about an exhibit dedicated to punk rock, “PUNK: Chaos to Couture,” that is on view through August 14 at the holy grail of museums – The Metropolitan Museum of Art in New York City.

Yep, you read that right – there is an exhibit at the Met that is celebrating punk’s impact on high fashion from the movement’s birth in the 1970s through its continuing influence today. Sid Vicious is bent over with laughter in his grave!

A quote from the Director and CEO of The Met: “Punk’s signature mixing of references was fueled by artistic developments such as Dada and postmodernism,” said Thomas P. Campbell, “so it makes sense to present this exhibition in a museum that also shows the broader output of those movements.”

I love it! So Mr. Campbell, what you’re saying is that after years of getting grief from “The Man/The Establishment,” one of the most prestigious and largest museums in the world is embracing punk rock. And it gets better! To benefit that celebrated the opening of the exhibition that took place on May 6 featured Beyoncé as Honorary Chair!

Presented as a multimedia, multisensory experience, the clothes are animated with punk music videos and the exhibit is organized around the materials, techniques and embellishments associated with the anti-establishment style.

Each of the seven galleries has designated punk heroes who embody the broader concepts behind the fashions on view. For example the first gallery is devoted to CBGB in New York City, represented by Blondie, Richard Hell and Patti Smith while the Do-it-yourself section highlights Sid Vicious (Sex Pistols guitarist). Exploring punk’s tradition of provocation and confrontation through images and text is exemplified by The Clash and the section that examines the effect of punk’s rip-it-to-shreds spirit is typified by Johnny Rotten (Sex Pistols lead singer).

Surprisingly, there are a lot of heavy hitter designers participating in the exhibition including Christopher Bailey (Burberry), Francisco Costa (Calvin Klein), Dior, Domenico Dolce and Stefano Gabbana (Dolce and Gabbana), Karl Lagerfeld (Chanel), Helmut Lang, Martin Margiela, Malcolm McLaren, Alexander McQueen, Hedi Slimane (Saint Laurent), Gianni Versace and Vivienne Westwood, among many others. Additionally, a book called Punk: Chaos to Couture, by Andrew Bolton, with an introduction by Jon Savage and prefaces by Richard Hell and John Lydon (a.k.a. Johnny Rotten of the Sex Pistols), will accompany the exhibition.

Get out your leather, skulls and studded boots – The Met has embraced punk rock!