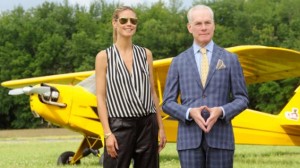 Although I’ve always enjoyed Project Runway I really can’t believe the show is in its 12th season. That’s 12 seasons of crazy personalities, groundbreaking and horrifying fashion, every strange fabric you can think of and hilarious commentary from Michael Kors and more recently Zac Posen. I’m impressed that the show somehow continues to find ways to reinvent itself – some changes have been better than others – and we’ve learned that in fashion and TV reinvention is crucial.

-The biggest prize package ever – worth close to $400,000.
-Using a sponsored GoBank account and debit card, the contestants are responsible for managing their own budget. So does that mean they get a set amount at the beginning and there’s a possibility that they will run out of money before the season ends? Good luck with that one!
-This season features a “blind” runway which means the judges don’t know who made which outfit as the clothes are coming down the runway. They only find out at the end – right before Heidi announces who has the high/low scores and who is safe.
-Fans were given the opportunity to choose between three former contestants and vote on who is brought back. The choice of the people? Kate from last season.
-Tim Gun will now sit with the judges on the runway during the show (it’s about f-ing time) but since he’s the contestants’ mentor he offers advice but doesn’t actually judge.
-He does, however, get one “save” called the Tim Gunn Rescue which means at some point during the season he will save a designer that the judges kick off.
-The six looks that represent the best and worst from each challenge will be brought to the judges so they can have a closer look and discuss. This is probably the best new addition since the judges can look at the clothes in further detail while consulting Tim.

Shaking things up was probably the best decision the Project Runway powers that be could have made. Looking forward to this week’s episode!