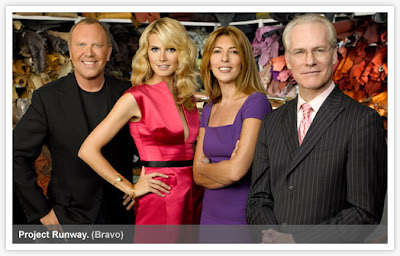 Having a 90 minute show has its positives and negatives. On the plus side it demonstrates that people love the show so much that an hour was just not enough and that the network found it so profitable and popular that they deemed it necessary for viewers to spend more time with the people on the show. On the other hand there is of course the question of when too much of a good thing can ruin something great.

For its eighth season, which premiered last Thursday, the powers that be decided that each episode of Project Runway was going to be 90 minutes rather than 60 minutes. I wasn’t sure how I was going to feel about the extra time for a show that prides itself on featuring strange designers who sometimes become more like characters than real people. But since I don’t have a choice in the matter I thought about which parts of the show I’d like to see expanded.

I know that I like hearing the judges talk. Michael Kors and Nina Garcia are as creative with their comments as they are with their fashion. They don’t take shit from anyone and don’t want to hear any excuses. Also, their metaphors are hysterical. When talking about one contestant’s creation in the season premiere Kors said, “she’s like the mother of the bride who’s a belly dancer.” When describing the same garment, Garcia noted, “It’s almost fascinating but it’s fascinatingly bad.” That being said, Heidi Klum can be one of the most annoying and condescending people I’ve ever seen on a reality TV show. As a judge, and arguably the final word, saying things like “snooze fest” and making fun of people who don’t understand every word of her German accent is both obnoxious and laughable considering she pronounces the name of her show as “Pwoject Wunway.”

So before watching the premiere I thought to myself, what will they fill the extra minutes with? More judge chatter? More workroom banter? Additional Tim Gunn commentary? Or will it just turn into too much airtime that could have been left on the cutting room floor? If we don’t get more time with the judges then of course more time with Tim Gunn would be preferable. Although his repetitive name checking of Garnier and L’Oreal wears thin it’s not his fault since (presumably) the producers and sponsors force him to do this. Even when he’s plugging these companies he still sounds smart, polished and very charismatic.

After watching the first episode I found that the extra time was pretty well distributed but the most noticeable addition was more time with the judges which of course was just fine with me. Whether or not they need the extra time is debatable but maybe that’s because we are used to half hour or hour shows. Maybe Project Runway is the start of a new trend (insert obvious metaphor here) and maybe future shows will be an hour and a half or possibly two hours. Maybe episodes will turn into mini movies and the number of weeks the season runs will decrease while the number of minutes in each episode increases. Whether these extended episodes will be a success or the demise of the show remains to be seen. We’ll see what unravels over the next few weeks.