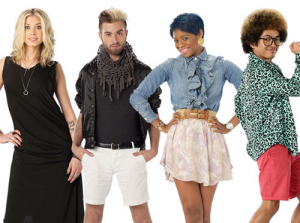 Welcome back Project Runway! Although this is a big season for the show – 10 years is definitely an admirable accomplishment – after the first episode I’m already questioning if this season is going to be interesting or if it’s going to feel more like “been there, done that” rather than “making it work.”

First of all it seems like the powers that be went out of their way to find the nuttiest nutjobs out there – kind of like what MTV has done to destroy the once great Real World. Not to judge a book by its name but how is it possible that people named Buffi, Fabio, Gunnar and Kooan (no question the strangest of them all – in fact this guy looks like one of Peter Pan’s lost boys) are all in the same group of designers? I mean seriously – come on!

On another note, while this is the 10th season of the show, it’s the first that Heidi Klum is single. Not that it should matter – she has a job to do and the show, of course, must go on – but it is worth noting. Also, I find it interesting that for the first episode of the season they brought in two guest judges. Of course Patricia Field is a big deal designer who had the huge task of designing for Sex and the City for six years and charismatic actress Laurent Graham is always classy and fun, but why were they both on the same episode? Can Klum, Michael Kors and Nina Garcia not handle making choices with just four judges or was this about kicking off the season with major star power? It’s not the end of the world but again, I do find it interesting.

So how will this season set itself apart? Based on the fact that Field was the first ever guest judge in the first season of Project Runway makes me think they will be doing a few throwbacks to celebrate their 10th anniversary which will be fun. I just hope it’s not an excuse to not seek out new people and new perspectives because that’s what has made this show interesting to me – a person who knows very little about sewing, clothes and fashion.

If nothing else the show will make summer television even more exciting than usual. Show us what you’ve got Runway – we’ll be watching.