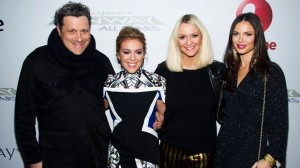 Spinoff shows are always interesting because you really never know what you’re going to get. You’re used to a character in a certain situation and certain surroundings and then all of the sudden they are surrounded by new people and are doing new things. Sometimes it works and sometimes it doesn’t. A few examples of the good and the bad:

Probably the most successful “non-scripted” spinoff/reality show was The Hills (Laguna Beach) which is shocking considering the number of awkward silences and stares that occurred during every episode. So I’m thinking that if The Hills can garner that kind of popularity than Project Runway All Stars, which features very talented people making beautiful things instead of random people with fake jobs, could be just as popular.

Last week launched the third season of All Stars and the powers that be at Lifetime made some wise changes such as giving Alyssa Milano the host position and making sure Isaac Mizrahi continued as a judge. I can take or leave Georgina Chapman and I’m glad supermodel Angela Lindvall is gone because every time she spoke I felt as though she was reading from cue cards.

As far as the contestants go, All Stars made some interesting choices this season. It brings back some of the fan favorites, arguably Project Runway’s best talent and of course some dramatic designers from past seasons. I always like when they choose strong competitors who got far in the competition (i.e. went to fashion week) but didn’t win their respective seasons. In past All Stars seasons they have not included winners but this time there are a few, including Seth Aaron Henderson and Irina Shabayeva, which I find a little bit odd. Aren’t they double dipping? And if they those designers are in fact as successful as they say they are what are they doing on the show?

On another note I’m glad that even though this show is a spinoff they still bring the star power when it comes to the guest judges. The premiere episode was a punk challenge (the runway show was awesome!) and the guest judge was the original female punk – Debbie Harry! The designers were instructed to listen to a selection of her new songs including “A Rose By Any Name” for inspiration. Love it! This week’s episode was the avant-garde challenge and the contestants drew their inspiration from the insects/arachnids from Museum of Natural History. Some beautiful pieces came about from that challenge but Elena’s constant freak-outs and crying almost ruined the episode for me. While I understand that reality shows need drama it is not effective when the stomping around overshadows the beautiful dresses.

Project Runway All Stars works because the challenges are interesting, the designers are extremely talented and it’s fun to see former contestants from a variety of seasons back in action. My money is on Mychael Knight, Seth Aaron Henderson and Viktor Luna for the top three. See ya next Thursday!