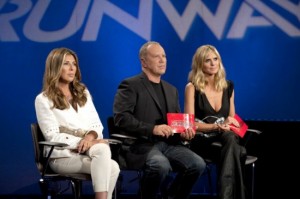 I know it’s a little late but after watching last week’s episode of Project Runway I was left rolling my eyes at the judges, and not surprisingly, my biggest eye roll was directed at Heidi Klum.  While the final four contestants all have something to offer the show is a competition and cuts need to be made.   But last week was a big fake out and no one was kicked off.

A little bit about the final four contestants who will compete at Fashion Week:

Kimberly makes pants very well but her mini collection from last week looked like something out of J.Lo’s closet circa 1997.  Big hoops, ridiculous colors, high braided ponytails.  Please take that back to Jenny’s block immediately.

Viktor is like this year’s not-as-fun Mondo – he definitely has a vision, is creative and his ideas are borderline brilliant but his demeanor is so lame.  He’s always bitching.  No offense but there were way too many queens on this season and Viktor and Josh are two of the worst.

Speaking of Josh, his neon-colored choices remind me of Beaver Creek ski hill on gaper day.  That being said he is a risk-taker which everyone appreciates because at least it makes for good television.  If the judges love it Josh is happy, if the judges hate it he shouts back at them in all his bitchy glory.  Ridiculous and hilarious at the same time.

And then there is Anya.  Her taste level is probably the best of the bunch but she is the epitome of amateur hour.  Clearly I can’t sew either but I’m not competing on a show where sewing should come to designers like skating comes to hockey players.

Of course all four designers have something to offer but the whole point of being judges is to judge – to make decisions – but Heidi Klum, Michael Kors and Nina Garcia couldn’t make a decision last week.  Instead, all four contestants are going to Fashion Week which is fine – I can see why making the call to get rid of someone was hard – but from what we’ve learned from this show is fashion is a cutthroat business so where are the balls?

I guess seeing four collections rather than three will make this week’s episode more interesting but I just find it hilarious that the judges can’t make a game- time decision.

Get a grip Heidi – I’m sure you’re the one behind this nonsense.