I’ve read and reviewed countless books over the years, but Kelly Clark’s Inspired is the first one since publishing my own book. While I’ve always read everything through the eyes of a journalist (professional hazard), this time was a little different. Now that I’m reading through the author/journalist lens, I find some similarities, some differences, a lot of positives, and a few negatives in Inspired. An example of a similarity is in the Introduction when Clark clarifies that the reader doesn’t need to know anything about snowboarding to relate to her stories. I made that clear in my book as well. Another similarity/fun fact is that Clark and I have a person in common as we both acknowledge Dean “Blotto” Gray in our books!

The Foreword by Donna Carpenter, Co-Founder/CEO of Burton, is essential because she says all the things Clark is too humble to say. At the time Inspired was written (2017), Clark had earned three Olympic medals, over 75 wins, a 16-contest winning streak, and more than 140 podium finishes. She was also the first female to land a 1080 in the pipe and is a five-time Olympian – the most of any competitive snowboarder, male or female, in the history of the sport. I also love the third sentence of the Introduction: “Throughout this process I have wished I had paid a little more attention in English class.” I definitely laughed out loud.

While I should have known better from a title like Inspired, I thought the book was going to be more of a sports biography (similar to Wookie Is Not His Real Name) but it’s more of a motivational/self-help book which wasn’t really what I was looking for when I bought it. For example, the Reflection Questions at the end of each chapter are annoying for the casual reader. Unless someone is really looking to Clark for answers to their self-help questions, or this book is going to be taught in a Sports Psychology class, those questions are not necessary. And even if Clark was adamant about including them, they should have been allocated to a separate section in the back of the book. Also, the breakout quotes are distracting – that format definitely lends itself more to magazine and newspaper articles.

Although I appreciate that Clark wants to look for the greater purpose in her talent, what she’s done for the sport of snowboarding, and how she’s inspired female athletes, the constant talk about contribution, goals, progress, and “heart checks” gets repetitive. That being said, I do love that she champions the “less talk more action” thought process because there is nothing more irritating than someone having a case of the “we shoulds” – a term I use to describe people who talk and talk about what “we” should do but never actually do anything. 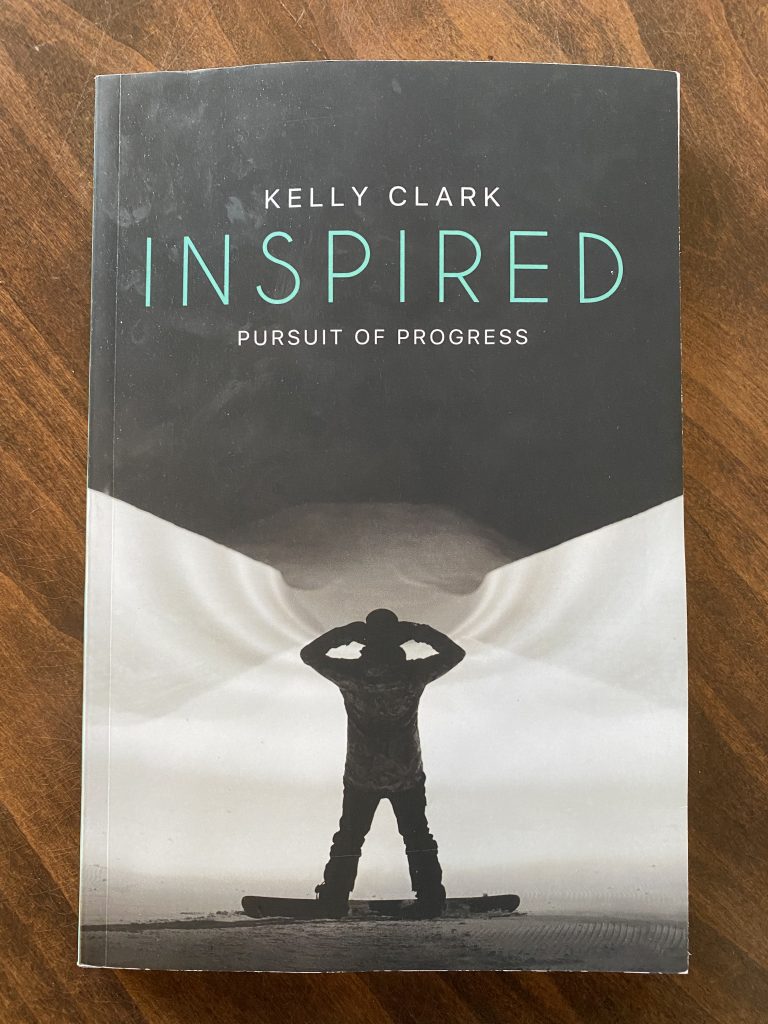 There is no question that being a kind, grateful, and honest person means a lot to Clark and she understands that being a female athlete in a male-dominated sport continues to be a big deal: “By putting my life on display, other people would be inspired in their own lives.” When Wookie and I initially talked about the thesis of my book, I said something similar – even though we were making ourselves “public figures” in our community (clearly on a WAY smaller scale than Kelly Clark), we thought telling his story might help people.

In her own humble way, Clark understands the value she brought to Burton. She also reiterates the importance of process, preparation, defining success, and not letting outside people or external factors affect her. For example, the serious injury she endured led to a debilitating hip surgery that took much longer than expected to heal. During her arduous recovery, she learned “to not take the small steps for granted and to celebrate progress.” Although not nearly to the degree she suffered, I can relate to that from my torn tendon this year.

Clark is adamant about pointing out the difference between success and significance and assigns a much higher value to significance calling it “our greatest human need.” Excellent point. Also, my favorite quote appears 14 pages shy of the end of the book: “I want to be someone who does what they say they will no matter what.” Kelly Clark and Laura Lieff both believe in the importance of accountability!

“I pointed my life in that direction and never looked back.”

“Instead of adding insult to injury, I added injury to my broken morale.”

“I have seen many people come and go in my career because some are not able to stay motivated in the in-betweens.”

“It is one thing to have the skill set, and it is another thing to execute it.”

“Playing it safe is always a risk; it comes with the risk of regret, which is one of the most unsettling scenarios you can manufacture in your life.”

“Preparation is a key to impacting the world around you instead of having it impact you.”

“My goal that year and every year since has been to raise my own bar.”

“Some of the most well-intentioned people can give the worst advice.”

“Comparison steals from you and leads to all sorts of insecurity.”

“Identifying what makes us feel threatened is more than half the battle.”

“Redemption is a beautiful thing and often enjoyed by those who are willing to endure change.”

“True grit is found in someone who does not let their feelings dictate the choices they make when pursuing a goal.”

“Greatness is an inside job.”