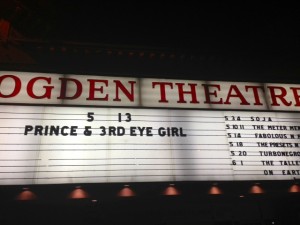 Back in March when I got the word that Prince would be performing at the Ogden Theatre I thought for sure it was a joke. One of the biggest artists of all time is going to play at a 1,700 capacity venue on Colfax? You’re jerking my chain. Luckily I was wrong.

Following his SXSW performance in Austin, Prince announced a West Coast nine-city, 17-date tour of theaters called “Live Out Loud” and each night he was going play two shows –at 8:30 p.m. and 11:30 p.m. with the grand finale taking place on May 13 at the Ogden. Ticket prices were astronomically high and everything was general admission. I didn’t care. I had to see this.

In August 2004 I was lucky enough to see him at the Pepsi Center on his Musicology tour which I assumed would never happen again and it was a great show. We got to hear an acoustic version of “Little Red Corvette,” he blasted through “Baby I’m A Star” and “When Doves Cry” and we got what we paid for – a two-hour arena extravaganza. And nine years later I’m still talking about it so I figured it was worth the money to do it again with one tenth of the people.

Although the show was slated to start at 11:30 p.m. we arrived at 9:30 p.m. to get in line. So old school but that’s what you do when it’s GA and the artist you’re going to see has 10 platinum albums, thirty Top 40 singles and has sold over 80 million records worldwide. As we waited in line on Colfax, the event staff – contracted by the Ogden because they clearly needed more help – checked our IDs and gave us wristbands while we waited. Smart move considering everyone, including us, was anxious to get inside and grab spots. As we waited we learned a few things: 1) There was no merchandise for purchase. 2) No photos or video or they would kick you out.

At 10:30 the doors opened and we immediately went upstairs. We wanted front balcony seats and we got them. An hour later Prince appeared and he, along with chick trifecta band 3rdEyeGirl, came out guitars blazing. Clearly channeling Jimi Hendrix, he was sporting an afro and a black sequined outfit that might have made Slash blush. Speaking of Slash, the girls Prince found for this tour shredded their guitars and went hardcore Dave Grohl on the drums. It was unreal. Featuring guitarist Donna Grantis, bassist Ida Nielsen and drummer Hannah Ford, 3rd Eye Girl is a badass trio that really brought the rock and roll that would have made Angus Young/Slash/Nikki Sixx proud. And they brought it out of Prince too. This was more than a concert – this was a rock and roll party that didn’t stop for 90 minutes.

The show kicked off with “Let’s Go Crazy” and we knew it was going to be quite a ride. Prince, who is 54 years old, sounded great. The notes he can hit are incredible and the screeches and pops in his voice are like a separate instrument. It could have been 1999 or even 1989 – that’s how good he sounded. And not that anyone needed to be reminded of the fact that he is one of the greatest guitarists of all time but he made that very clear last night. Balls to the wall guitar with Grantis keeping up every step of the way – especially during their snippet of Led Zeppelin’s “The Ocean.” Mind. Blown. I also loved the neon-colored lyrics that appeared as the backdrop during his new song “Screwdriver.” The chorus is “I’m your driver, you’re my screw” which is so hilariously Prince-esque and one of the funniest lines is “Everywhere that we go now, there’s a show now, people pay money for the rock ‘n’ roll.” We sure did! And it was worth it!

We also got to see him play piano – something that didn’t happen at the 2004 show – and when the lights dimmed and all we saw was his silhouette with purple backlighting it gave me chills. I couldn’t believe it was happening – a stripped down “Purple Rain.” I’ll never forget it. Especially since Prince loves his medleys – he will tease a song and only play the first few notes or will just play snippets of hits and combine them together which is fine but you never know if you’re going to get the whole song. Needless to say “Purple Rain,” which is by no means is my favorite song, was one of the most memorable moments in my concert-going history. In fact this whole experience was remarkable and I think Prince had just as much fun as we did.

Best Prince quotes of the night:

While sitting at the piano and playing the first few chords of “Purple Rain”: “Colorado, listen to me. Strange times in America now. We gotta try to get along. You’ve heard before, but now more than ever, that’s what we need. We also need your voice. You can sing if you want to.”

(And the whole place sang along…)

Also during “Purple Rain”: “I can’t argue with anybody anymore. I’m too happy. I’m too blessed. Aren’t we all? You know times are changing. They’re not the same any more. It’s time we all reach out for something. Something new. Something different.”

(As someone who was notorious for fighting with his label, having copyright issues, going by a symbol and being a weird guy in general, it was nice to see him really having fun and connecting with the audience.)

After the “Nasty Girl” section of the medley: “Ain’t no party like a purple party. Purple party don’t stop.”

Let’s Go Crazy
Endorphinmachine
Screwdriver
Stratus
The Love We Make
How Come U Don’t Call Me Anymore?
I Could Never Take the Place of Your Man
Guitar
Plectrum Electrum
FixUrLifeUp

She’s Always in My Hair
U Got the Look