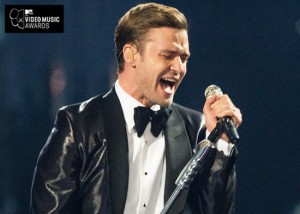 Now that I’ve finally gotten around to watching my DVR version of the MTV Video Music Awards, which by the way aired a week ago, I’ve decided that everyone, including me, talked about the wrong portion of the program. But let me back up for a second.

Each year I feel that MTV award shows are getting less and less relevant because a) MTV no longer airs videos. b) Some of the performances have turned into more of a strip-off than actual music. 3) Some of the artists are so young I’ve never even heard of them before.

That being said MTV still knows how to bring on the moments (positive or negative) that get people talking. Unfortunately what most people were talking about was the inappropriate shit show that was Miley Cyrus. What we should have been discussing was what an amazing entertainer Justin Timberlake has become.

Dressed to the nines as always, Timberlake cruised through a medley of his massive catalog of hits which included “Rock Your Body,” “Cry Me A River,” “SexyBack” and “Mirrors,” among many others and the audience ate it up. And why wouldn’t they? Timberlake’s ability to sing and dance with such style and ease in front of millions is something that even the megawatt stars in the audience were envying.

To top it off, in the middle of the hit-packed performance the members of ‘NSYNC appeared to sing and dance with their former bandleader and it was actually very fun to watch. It was also a reminder of how far Timberlake has come. Although he may or may not be where he is today without ‘NSYNC, the onstage reunion reminded me of his amazing arc from boy band kid to one of the biggest pop stars in the world.

It’s also fitting that Timberlake was given the Michael Jackson Video Vanguard Award since August 29 was the King of Pop’s birthday and because if there was ever a person to pass the torch to it is without a doubt Justin Timberlake. In fact this year’s JT medley of hits reminded me of MJ’s unforgettable 1995 MTV Video Music Awards appearance where he also ran through some of his biggest hits during a performance that lasted over 15 minutes. It was amazing.

Jimmy Fallon presented JT with the award and introduced him as “The President of Pop” while the audience clapped and cheered through a well-deserved standing ovation. Side note: The last time ‘NSYNC played at the VMAs was with Michael Jackson in 2001 joining the late King of Pop for their smash, “Pop.”

At 32 years old, Timberlake has already moved more than 70 million albums over the course of his recording career and has won 14 VMAs – some of which he won with the band and others as a solo artist (something he pointed out in his acceptance speech). The Vanguard Award is reserved for artists whose work in the video medium has broken barriers and helped push the art form forward, with past recipients including the Beastie Boys, U2, Britney Spears and Madonna. If anyone has pushed forward the entertainment business during my generation it’s Timberlake. He is a star and deserves every award he gets. There will never be another Michael Jackson but if anyone has learned from the King of Pop – dancing, singing, entertaining, etc. – it’s the newly minted President of Pop. Congrats Justin – you’ve earned it.