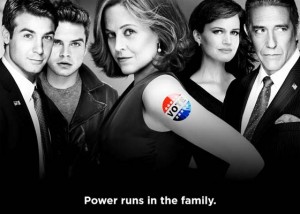 When I first saw ads for the “six-episode miniseries” titled Political Animals I wasn’t sure I was interested. A behind the scenes look at a political family in the White House? I felt like I’d seen it before – West Wing anyone? Also, two of the main female actresses are not my favorite. I don’t love Sigourney Weaver (although she ended up being ok in this show) and then I saw that annoying and ubiquitous Carla Gugino (Entourage, Californication) was in it too who I’m not a fan of because she plays the same role in every television show. She’s always the hardass, hard-working woman who wears six inch heels and makes six figures – and her forced dialogue gets old. She plays a very significant role as a journalist who has spent her time trying to bring down the First Family but eventually becomes an unlikely ally.

Even with all of my reservations I still set my DVR to record to record the six episodes. Speaking of which, that was another reason I was rolling my eyes at this show. What the hell is a six-episode miniseries? Have our attention spans grown so short that we can’t possibly follow a storyline for a whole television season? I did some research and apparently USA decided to pitch Political Animals as a “limited-series television event” because that approach worked for the History channel, which drew about 14 million viewers nightly, its largest audience ever, to its Hatfields & McCoys mini-series. Ok fine, I thought to myself, six episodes it is.

Weaver portrays Elaine Barrish, a divorced former First Lady and Governor of Illinois, as well as the current Secretary of State. While her character does have some similarities to Hillary Clinton, Weaver has said in interviews that the show is “very much about families who have been in the White House and the price they’ve paid for being in the White House.” Through the series, Weaver played an embarrassed yet politically powerful wife very well as she commanded respect without coming off like a scorned wife even though she had every right to act that way. (Julianna Margulies does a better job of this in The Good Wife but that’s neither here nor there).

Barrish’s husband Bud was a popular President of the United States during the 1990s despite his extramarital affairs (hello Bill Clinton!). After leaving the White House, Barrish was elected Governor of Illinois and ran for the Democratic nomination but lost to opponent Paul Garcetti. The night Barrish conceded the nomination, she asked her husband for a divorce. Two years later, as Garcetti’s Secretary of State, Barrish deals with State Department issues while trying to keep her family together.

Although the show is definitely smart and well-written, listening to Bud’s southern accent while looking at his cartoonish face was hard for the first few episodes. Also, Bud and Elaine’s sons fall right into a stereotype that is boring and predicable: one son is gay, a drug addict and suicidal (TJ) while the other is the perfect citizen and is Barrish’s Chief of Staff (Doug). Then there is the alcoholic former showgirl grandmother – a fabulous Ellen Burstyn – and Doug’s beautiful but bulimic fiancé who add to the crazy factor.

The first three episodes were fair but the final three were riveting television – so much so that I wanted to see more. I think part of the reason this show didn’t become an enormous hit is that everything was rushed – the sequence of events, the character development and the juicy action that goes along with it. That being said the finale left a lot of questions unanswered and drew in 2.3 million viewers so anything is possible. Maybe this political drama won’t be so limited after all…