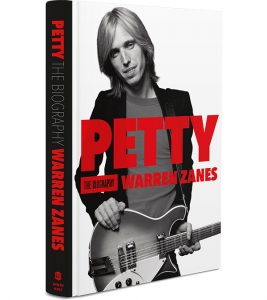 When I first picked up Warren Zanes’ book, Petty: The Biography, I was happy to see the New York Times Bestseller designation because, even though I consider Tom Petty as one of the greatest rock and roll bandleaders ever, I didn’t know much about his background. All I knew was that he’s from the Florida swamp (aka Gainesville) and that every live show I’ve seen has been outstanding. Basically, before reading this book, what I knew of Petty’s background mostly consisted of his music catalog so I had a lot to learn. And learn I did! While most of the rock and roll biographies I’ve read are written in the first person (regardless of who actually wrote it), Petty was written in the third person which, as a former newspaper writer, I appreciated immensely. Reading someone else’s descriptions of Tom Petty’s life was interesting and learning about him through his own words, along with quotes from his family, friends, and bandmates, is exactly my style.

There are so many aspects of Petty’s story that are interesting, especially how all three of his signed bands are/were so incredibly successful: Mudcrutch, the Heartbreakers, and the Traveling Wilburys. Also, reading about his friendships with George Harrison, Jeff Lynne, and Stevie Nicks was fascinating. But before all of the fame, Petty lived in a tough home where things didn’t get talked about – under rug swept was more like it – and his family life never really improved. The family he created for himself is much better but he barely survived his divorce. Luckily his current wife was there to save him – his words, not mine.

As mentioned, I learned so much about Petty from reading this book that it’s hard to narrow down the fun facts but here are a few (and by that, I mean several) of them:

Here are some of my favorite quotes from the book:

“Every song had to count. When Petty wasn’t on the road, he was in the studio.”

“They all came out of the same quiet that haunted a lot of American homes in the fifties. Rock and roll was the thing God delivered to break up the silence.”

“As early as fourteen, Petty understood that people treated you differently when you showed up with a guitar and three other guys.”

“That was why you made records – to be in a car and hear your song on the radio.”

“Cautionary tales were in every other room I passed through.”

“Songs were the place he took his loss and turned it into something else. Which may not have been the same as grieving, but it was something.”

“Petty had become a writer who could set up a story in a couple words.”

“The primary intent of active rockers is to say something, and to say it with the individuality that is at the base of all worthwhile art.”

“He was a businessman among other things. But, mostly, Petty and his band weren’t joiners.”

“Petty had written one of those songs – ‘Insider’ – that pins down some human truth.”

“Rock and roll provided a shaky foundation on which to build a family life.”

“Even the best band, without records, is local.”

“If you want to make a rock and roll record, you’ve got to let some feathers fly.”

“Dylan was another teacher who showed up when Petty needed him…no one interferes with the mystery around Dylan, which may be his greatest creation.”

“He got tinted windows on his soul.”

“Listening to ‘Free Fallin’” you feel like Petty is across the table.”

“A band was everything, a shield and a shelter.”

“If you’re going to be in a rock and roll band for forty years, there will be some causalities.”

“Good recordings seem to find their way into the world.”

“Once you’re in a Petty song, another world is unlocked; a place of story, emotion, characters you feel you know, longing, some sense of freedom.”

If you’re a Tom Petty fan, and you enjoy absorbing rock and roll backstories, this book is definitely for you. No details are spared but the story is told in way that focuses on what it takes to attain success and longevity in the music business without placing too much emphasis on the negative parts. Tom Petty earned his place in rock and roll history a long time ago, yet he’s still touring. I’m so looking forward to seeing him again next month – for our 15-year anniversary at Rock Rocks Amphitheatre.