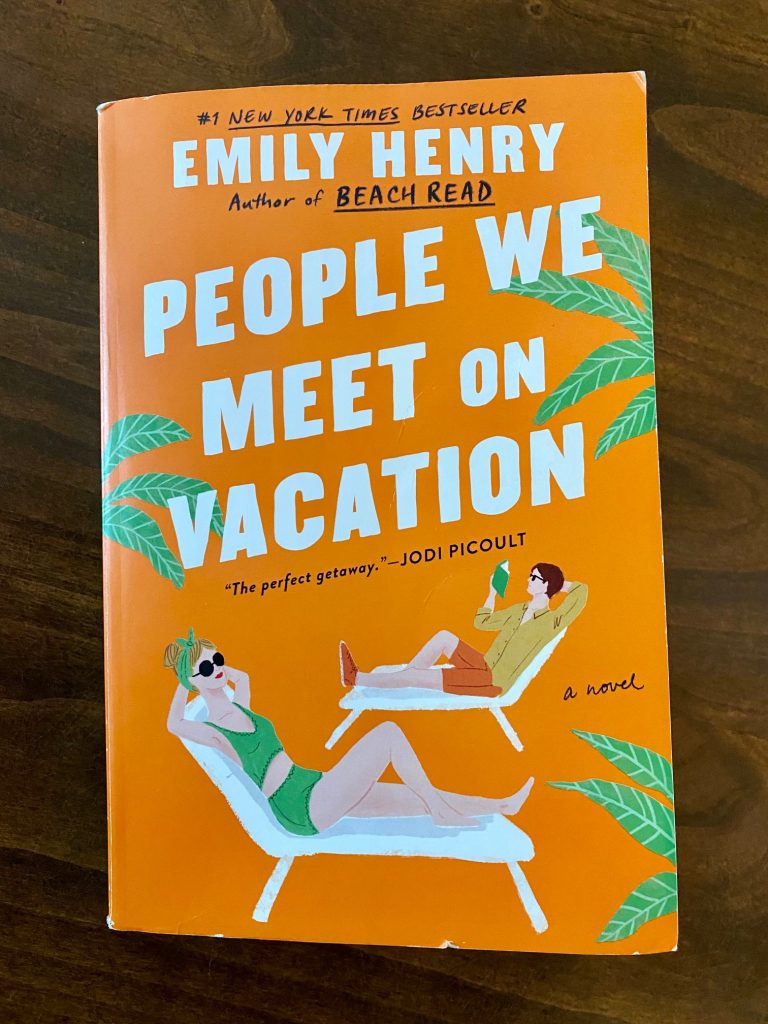 I should have just read Book Lovers and left it at that. Actually that’s not totally fair. Emily Henry is an excellent writer, and she definitely knows how to create clever dialogue, but People We Meet On Vacation was extremely disappointing after reading the fantastic Book Lovers. https://lauralieff.com/book-lovers/

While both Nora Stephens and Poppy Wright are strong, smart female narrators, I found thirty-something book agent Nora much more relatable than (self-proclaimed) twenty-something millennial Poppy. Also, the people in Nora’s life have a lot more depth which makes a huge difference because the banter between Nora, Charlie, and Libby in Book Lovers serves as a highlight. Conversely, the conversations between Poppy and Alex in People We Meet alternate between funny and extremely redundant. In fact, there are several sections of the book that don’t need to be there which is mostly due to redundancy and predictability. Fifty pages into the 361-page book (it is WAY too long – maybe 100 pages too long), I knew how the story was going to end. Predictability is not my favorite trait of any story. I want to yearn to know what happens next – not flip pages with the assumption that I’m right.

What works: Henry is a descriptive and clever writer. She knows how to paint a picture of people, places, and even the seemingly smallest situations and details. For example, Poppy seems to constantly notice the corners of people’s mouths, which is interesting, and specifying that a person’s “winged eyeliner could slice through an aluminum can” is fantastic. I also like the vivid way she explains how she feels: “like someone reached into my rib cage and held my heart inside… just long enough to run a thumb across a secret wound.” Brilliant.

Another positive is the clear juxtaposition between Poppy and Alex – “opposites attract” doesn’t even begin to cover it. Also, learning about Poppy’s quirky family living in a small, middle state town is hysterical – especially how she describes her parents’ house as a museum of her and her brothers’ childhood. I would have liked to read more about them and about her New York buddy Rachel.

Additionally, in an effort to make her narrator more relatable, Henry has Poppy clarifying random things throughout the book, such as making sure the reader knows the fishnets she refers to are actual nets for fish rather than stockings. Those nuances definitely add to the overall quality of the narrative.

What doesn’t work: All that being said, Henry spends too much time talking about the same situations (i.e. Poppy and Alex’s obvious chemistry) over and over again which is not conducive to the narrative. Only in the last few chapters of the book does the reader really get some truth about Poppy: her entire adult life has been about the need to run away from her hometown and not only live elsewhere but travel the world as a way to keep running.

Henry also uses destinations Poppy and Alex visit to exemplify Poppy’s travel writing capabilities which include a bar in Jackson Hole that has saddles for bar seats (I have been to that bar!) and the way the colorful streets of New Orleans are known for people walking around with “alcohol in slush form and kitschy supernatural shops.” Those trips and anecdotes are helpful and fun. But then, for no discernible reason, other destinations are skimmed over (i.e. Vail for crying out loud!). One would think that, in a book about taking trips with people the narrator cares about, some rhyme or reason for choosing whether or not to provide these details would exist. No such luck.

Additionally, it takes 34 chapters for the reader to get some real introspection from Poppy which is way too long to wait. I can see some readers getting frustrated and not finishing the book which would mean missing gems like this: “You can’t outrun yourself. Not your history, not your fears, not the parts of yourself you’re worried are wrong.” And that would be a shame.

Bottom line: Read Book Lovers and skip People We Meet. When I finished the former I was sad because the story was over while the latter felt more like an assignment than a vacation.

Fun fact: Both books end with an Epilogue which is a nice touch but it’s almost like Henry is assuming these novels will eventually turn into movies and something like “Six Months Later” will appear on the screen so the audience can see where the characters end up.

“You approach everything with a wolfish gleam in your eye.”

“What kind of barbarian listens to Christmas music in May?”

“Are you misunderstanding me on purpose?”

“There’s nothing so off-putting to some people as someone who seems not to care whether anyone else approves of them.”

“Willing to die for my denim.”

“I’m anchored only in this moment.”

“It was both a sweet and hurtful thing for him to say.”

“It makes my heart feel like a sore muscle.”

“Her eye-roll is minimal, but it stings.”