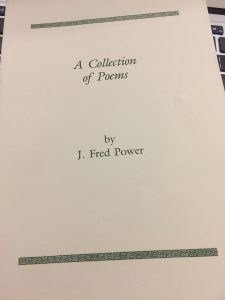 I love giving books as presents. I used to send CDs to people but since that ship has clearly sailed, and reading and writing is what I spend a lot of time doing, books have become one of my favorite gift options. Also, it seems like more and more musicians and actors are writing their memoirs so those are always fun to read, recommend, and pass along.

Recently I was the recipient (rather than the sender) of a special book that was written by J. Fred Power. Although I never met Power, he was the father-in-law of a woman who is very important to me and my best friend. Her name is Joyce and she is my best friend’s mother-in-law. But she’s more than that. I met Joyce about seven years ago and from the moment I met her she has been kind to me and treated me (and my mother) like part of her family. A perfect example of her thoughtfulness is the book she took the time to send me in the mail – A Collection of Poems written by J. Fred Power. Accompanying the book was a handwritten note explaining who Power was and why she thought I would enjoy the poems. She was right.

Published in Athens, Georgia in 1991, one year after Power’s death, the book is clearly a labor of love. The “Acknowledgments” page is written by his wife Ann and the “Foreword” is written by Angelia Moore who might have been one of his former students. There is no question that Power meant a lot to both of them as he is described as “poet laureate…not by election or appointment but by consensus.” Angelia describes Power as having “just the right tone and pattern to affirm his lifelong love affair with words.” I can’t imagine kinder words written about a writer! She also describes his voice as both strong and authentic and assures the reader that those who read his words “will hear his voice and remember.”

As someone who is always interested in the backstory or “Behind the Music” of people, this book was especially interesting because, in addition to the background provided by Joyce, Ann, and Angelia, several poems were accompanied by notes as well. Some of them were quotes from Power – specifically comments made to classes and groups. As a teacher’s assistant and tutor, I appreciated each one of those anecdotes because I imagined him expressing those words to his students and them taking the background into account as they read his poems.

While some of his poems were short, sweet, and humorous, others were lengthy descriptions of things he’d seen or done (i.e. spending time in Greenland where he was stationed during WW II). Either way, the small narratives gave the poems more context and subsequently more meaning. Clearly a Robert Frost fan, Power’s poems were both interesting and easy to read which I appreciate because I’m definitely not a poet. Writing poetry is a specific skill that some people have – I’m not one of those people. That being said, writing quality poetry using personal anecdotes is the way to go. These dedications really set the book apart because they helped get the story across and gave the words more meaning.

One of my favorites:

I’m thankful that the sun and moon

Are both hung up so high,

That no presumptuous hand can stretch

And pull them from the sky.

If they were not, now don’t you know

That some reforming ass

Would recommend to take them down

And light the world with gas.

The “About the Author” section was written by Diane H. Toney – that brings the total to three women who wrote the parts of the book that weren’t poems. Diane describes Power as being “many things to many people…but to all who knew him well, he was first and foremost a teacher.” He was an educator for 34 years – teaching high school students for 15 years and college students for 19 years. To say this man made an impact on those who knew him is an understatement. Even Joyce remembers him “demanding 200 percent from his student and his sons.”

Thank you Joyce for sharing this book with me – I enjoyed reading content written by someone who was important to you.