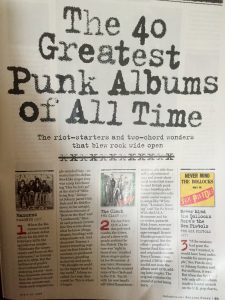 In its April 21, 2016 issue, Rolling Stone magazine published a list called “The 40 Greatest Punk Albums of All Time” which followed an extensive article on the Ramones. The preceding article outlined the band’s history, the mental health issues and family lives of each member, and their music legacy. It also recognized them as the “band of misfits that launched punk rock.” While I do like several Ramones songs, before reading the article I had no idea how much the band influenced the punk genre. I also didn’t know, but was not shocked to learn, that notorious music critic Lester Bangs was one of the first to use the term “punk rock.”

Here are the magazine’s choices for the top 10:

Although I was little surprised to see one of my favorite albums of all time occupy the number 10 spot, Nevermind is definitely credited for bringing punk to the masses. It was like Kurt Cobain, Dave Grohl, and Krist Novoselic made it ok to like a genre that used to be reserved for misfits, menaces to society, and overall pains in the ass. Just one of the many reasons that album is so incredible. I also thought it was interesting that number one through six are all albums released in the 70s, three are from the 80s, and only one from the 90s.

Over the next few weeks, I’ll be playing various songs from several of these albums on Bite the Bullet so if you’re a punk rock fan be sure to tune in on Wednesdays from 5 to 7 p.m. To view the list in its entirety visit www.rollingstone.com.