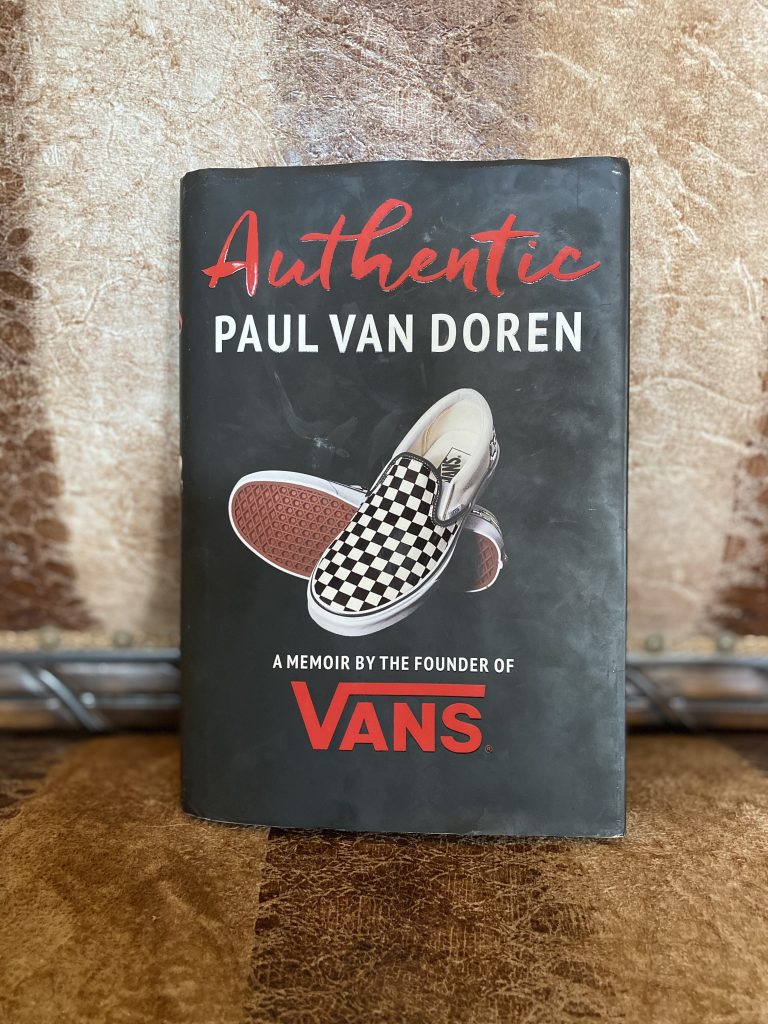 The last time I wrote about a shoe entrepreneur was in October 2018 after reading Phil Knight’s Shoe Dog – a memoir that chronicled his journey as the founder of Nike. In my review I wrote: Knight comes off as honest, innovative, and intrinsically humble. He is also not afraid to admit the mistakes he made along the way – both personal and professional – which lends to the authenticity of him and his story. Those sentences can be verbatim applied to Authentic: A Memoir by the Founder of Vans.

Written in the first person and characterized as a business memoir – which is exactly what it is – Paul Van Doren writes with candor, humor, sincerity, and honesty. So much so that, even though I’ve never actually heard him speak, I could hear him talking. Unfortunately, Van Doren passed away last week at age 90 – the day I started reading the book (very eerie) and two weeks following its release.

Although Van Doren covers a lot – literally from birth until last year as he mentions the pandemic in the Afterword – the main thesis of the book encompasses the importance of family, the notion that no one gets anywhere alone, and that Vans was and continues to be a “people company that makes shoes.” Van Doren talks about how much he learned from his parents and siblings and how he applied those lessons to his life both personally and professionally. He also discovered the importance of efficiency. “Early on, I learned that teamwork and a smart division of duties are what make any kind of operation effective.” Yes!

Although both professional and life lessons are detailed throughout the book, Van Doren tells them in such a way that I never felt like I was taking a seminar. I’ve read plenty of books that do that and it doesn’t always make for an enjoyable read. So don’t let some of the chapter titles (i.e. “Organize a System,” “Listen to Your Customers,” and “Get Back to Core Culture”) fool you – Van Doren is a storyteller. He talks about himself and his decades of experience in a way that feels, to use his term, authentic. His story is fascinating and people will want to read it. In fact, after I finish writing this review, I’m giving the book to my mother because she of all people will appreciate the highs and lows of retail, running a family business, and being part of an innovative industry.

Another fascinating aspect of the Vans story is, of course, the company’s connection with the surfing, skateboarding, and snowboarding industries. Van Doren talks about how it all began in the summer of 1964 at the US Open of Surfing at Huntington Beach. It’s one of many fun anecdotes. Another is how the now iconic waffle soles came to be and how the sticky soles were what originally attracted skateboarders to the shoes. I’ve always been fascinated with the Zephyr skateboard team that came out of 1970s California (our youngest pup is named for that team) and they had a huge impact on Vans. Comprised of Venice (Dogtown) skateboarders like Tony Alva, Stacy Peralta, and Jay Adams, the Zephyr crew was a group of misfits that brought skateboarding to the masses. Van Doren’s son Stevie recognized the opportunity which became a partnership that still goes on today.

Van Doren says, “When skateboarders adopted Vans, they gave us an outward culture and an inner purpose. Skateboarders discovered our shoes at a moment in time when the shoe industry was changing, and they helped us find a niche and identity we maintain to this day.” He also credits the Z-boys for “changing Vans’ entire trajectory as a company.” Big words for a bunch of renegade kids who love side stance boards. In the 1990s, snowboarding was added to the Vans roster of teams and, as a result, Vans snowboard boots were seen all over the 1998 and 2002 Olympic Games and beyond. In April 2020, Tony Hawk, arguably the most famous skateboarder in the history of the sport, became a global brand ambassador for Vans.

In addition to listening to his customers, Van Doren also made his company’s motto clear: “If you like our shoes, tell a friend; if not, tell us.” Exactly. Back before Yelp and online reviews (that allow anyone with a smartphone or computer to all of the sudden become a “connoisseur”) existed, customer loyalty  was all about word of mouth. Van Doren knew that and always wanted customers to let him know if there was an issue so he could rectify it immediately. Our people.

Over the years Vans also became a style leader and pop culture staple because they were willing to accommodate and innovate. Decades ago people loved the idea of customized shoes and that still holds true today. Jeff Spicoli wore Vans in 1982’s Fast Times at Ridgemont High, the Vans Warped Tour went on for 25 years (1995-2019), special Vans were created for Samuel L. Jackson for his Snakes on a Plane movie, and the list goes on. Vans has also collaborated with high-fashion designers like Marc Jacobs, Karl Lagerfeld, and the Museum of Modern Art. The company continues to give back through scholarships at the Berklee College of Music, grant sponsorships at various high schools, and Boards for Bros which donates skateboards to underprivileged kids.

But the Vans story isn’t all roses as there is an entire chapter that talks about why Vans had to file for bankruptcy after Van Doren stepped away from the company and allowed his brother Jimmy to run it. Which he did – into the ground. Van Doren and his family went back to basics and even Vans employees helped out by lending the company the money it needed to survive. Another incredible story of loyalty. The author says, “Everyone at Vans, from the CEO to the kid sweeping the floors, became a stakeholder in our climb out of the deep hole Jimmy had dropped us in.”

Van Doren goes on to say that “Vans is one of the few brands that crosses generations because people know where we come from.” So true. And that legacy is a force to be reckoned with – especially in a time where retail looks nothing like it used to look. Below are some of my favorite quotes from the book but this one is definitely the best because it personifies Van Doren’s self-awareness, business savvy, and overall thought process: “I’ve always found that there are basically two kinds of people. The first kind will tell you all the reasons why a certain thing cannot be done, and the second kind will start formulating ways to accomplish that very same thing.” NO TRUER WORDS.

Vans has been part of my family, or I guess I should say my family has been part of the Vans family, for many years. My mother wears Vans, Wookie of course does, I do, and Fleet does as well. We appreciate the brand, the family business aspect, and the way the company continues to innovate.

“You can always teach people how to do things. What you cannot teach people is how to understand other people.”

“If you don’t work as a team, you’re nowhere. The problem with most people is they don’t listen.”

“My best teachers in the art of retail were the customers.”

“If I’ve learned one thing in my ninety years, it’s that people do what they want to [but] they’ll become unwavering in their loyalty if you accommodate them.”

“Opportunity is a strange beast.”

“A legacy spirited in innovation.”

“Even when you’ve become the best you can be, you have to recognize that nothing is permanent. Everything changes. That isn’t a bad thing.”

“What I always saw as authenticity in the way I did business now anchors the brand. I can think of no better legacy.”

“If I have to tell you what I stand for, I’m not doing something right.”

“Recognizing people for what they contribute is at the core of all good business practice.”