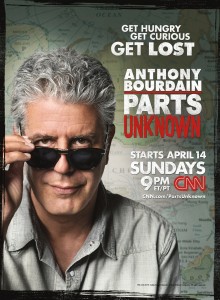 While I am definitely a fan of Anthony Bourdain – both as a writer and television personality – if I read one more article that refers to him as a “bad boy chef” I’m going to strangle someone. Yes, when he was a young chef he had an earring, drank, smoked and did drugs – so what? At this point he is a 56-year-old smart and successful husband and father with several books and tv shows under his non-studded belt. He is not some kid off the cooking line who doesn’t know anything and hasn’t been anywhere. In fact, Bourdain has probably seen more corners of this globe than any explorer in history.

As I’ve said before even though I don’t cook and am not a foodie, I really enjoy Bourdain’s writing and general persona which is why I was thrilled to watch the premiere of his new CNN series Parts Unknown (along with 747,000 other viewers) on Sunday. Exemplifying the power of Bourdain’s popularity, Parts Unknown‘s debut pushed the often ratings-challenged CNN to the top primetime spot in the 25-54 demographic on Sunday, beating out both Fox News and MSNBC.

The premiere episode featured Bourdain, in all his narrating glory, spending time in Myanmar mixing food, politics and culture. It was good to see him back on television chatting it up with the locals, learning about their day-to-day lives and checking out their sometimes gnarly customs.

Announced last May, Bourdain’s move to CNN comes after several seasons of the Emmy-winning host’s No Reservations series on the Travel Channel and just over a month after he wrapped up his stint as a judge on the low-rated reality show The Taste for ABC.

So now the big question is, other than being on a different channel, how is Parts Unknown any different than No Reservations? My very intelligent chef best friend believes that the former is going to take viewers to tiny crevasses of the world as opposed to the latter which, and I quote, “gave desperate housewives ideas for their next vacation.”

Here is the official episode lineup:

Although I’m not the best example of a world-traveler, I have been to L.A., Canada and Peru and I know a few people who have been to Morocco. So just how remote are these places? And more importantly, as viewers, do we care?

No matter where Bourdain finds himself, I usually find each episode fascinating because I’m entertained and always learn something. If he happens to be visiting a place I live, have lived or have visited – even cooler! Or, if he visits a place I’d like to see that’s awesome! Bottom line is that as a viewer I trust that Bourdain and his crew did a good job researching each locale and found interesting and exciting people, food and things to do. I’m not worried that he missed something or that he should have gone one place instead of the other because I’m confident that he has good reasons for his choices.

This Sunday he takes us to L.A. where he will examine Asian, Mexican and Latino culture and specifically Roy Choi – a Korean American who grew up on the fringes of Mexican and hip hop culture and whose food reflects a new American idea of “natural” fusion. Set your DVRs and let me know what you think!