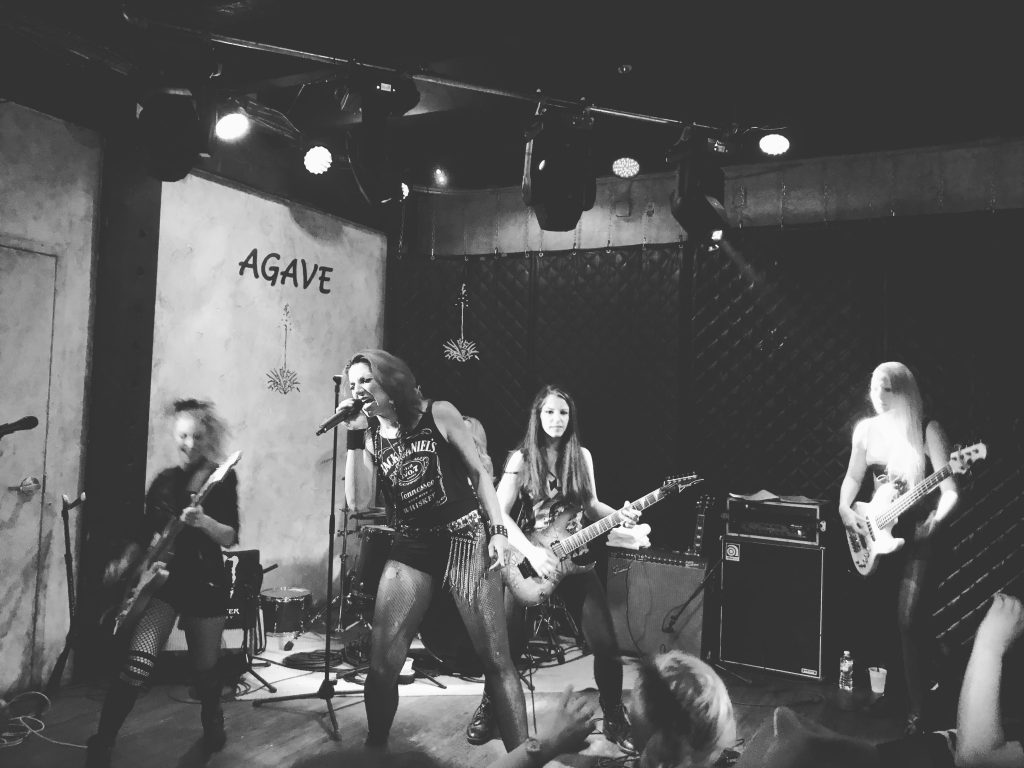 If you build it, they will come. If you book a Guns N’ Roses cover band, the locals will be there. And that’s exactly what happened at Agave last night when Paradise Kitty rumbled into town.

Dressed straight out of the Sunset Strip, the ladies arrived later than expected towing their luggage through the bar. Although I had never seen a band do that before, I figured that arriving late with a lot of baggage is what Axl would have done so it made sense. Clad in leather, fishnets, fringe, shredded black t-shirts, and rock and roll hair and makeup, these girls looked and sounded the part.

While all-girl tribute bands are nothing new, they usually put on one hell of a show and Paradise Kitty did just that. Like Hell’s Belles and Lez Zeppelin, these ladies know exactly how to rev up an audience and their musical prowess and stage presence made each one a fierce force to be reckoned with.

So why do these all-female rocker acts work so well? Whether or not you’re an AC/DC, Zeppelin, or GNR fan, what sets Brian Johnson, Bon Scott, Robert Plant, and Axl Rose apart from the rest is their vocal ranges. Because all of them can hit incredibly high notes, especially for dudes, in many cases female singers can handle the range better than the average male. For example, Axl’s voice spans nearly six octaves which means he can hit higher notes than Tina Turner and Beyoncé, while maintaining a baritone lower than Barry White. In short – his vocal abilities are off the charts.

But back to Paradise Kitty. Lead singer Jenna Syde doesn’t just look the part – she embodies it. Her voice sounds like my two favorite metal frontwomen who are currently on the radio – Dorothy Martin of the band Dorothy and Lzzy Hale of Halestorm. Like them, Syde leaves it all on the sweat-soaked stage.

Leading with a banger, Welcome to the Jungle, Syde sneered through the lyrics as she mimicked Axl’s iconic snake-like dance moves. The audience roared back. It was exciting to see so many GNR fans singing every word to every song and thrashing around to the ripping guitars and blazing drums. The smile on the lead guitarist’s face was infectious – clearly she was stoked to be there and loved the crowd’s momentum. Barely five feet tall and wearing a pillbox hat, I’m not sure how her tiny self was able to shred through all of Slash’s riffs but she killed it.

During their 90-minute set, the band slayed most of Appetite For Destruction, plus “Used To Love Her” (Lies), and “You Could Be Mine” (Use Your Illusion II). They also blasted through three of my favorite GNR covers: Aerosmith’s “Mama Kin,” Bob Dylan’s “Knockin’ on Heaven’s Door,” and Rose Tattoo’s “Nice Boys.” The energy never stopped, the singing never stopped, and the dancing never stopped. You know it’s a fantastic show when you walk away so drenched in sweat that you have to shower the minute you get home. That’s what happens when a GNR cover band rolls into Eagle County.