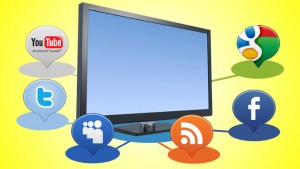 Although we already know that social media (especially Facebook, Twitter and Instagram) has clearly changed the way we communicate, do business and live, I’ve recently noticed how much social media has changed television and other media sources. The two most recent television examples are the two competitive reality shows I watch – The Voice and Survivor.

While the former is a much newer show than the latter, they both have used social media to shake up and add new twists. During the live shows, The Voice now gives America the option to “save” contestants by instantly voting via Twitter. During the finale of Survivor, host Jeff Probst used questions asked on Twitter from fans as talking points. Additionally, throughout the whole season of the show, hashtags were prevalent i.e. #blindside or #spyshack. In many cases they were used as funny pokes at the contestants when they would do or say something crazy.

Either way social media has become much more than just status updates and posting photos. It has become a way to show your life experiences to the world and also a tool to help humanize your business and encourage others to do business with you. And for the entertainment world it has given celebrities another outlet to speak their mind – for better or worse – and another way for fans to “follow” them. Instead of/in addition to waiting each week for US Weekly and People to hit the stands, fans simply follow their favorite celebrities on social media. And for television shows social media provides another platform to get people talking. Instead of the old school “water cooler” office conversations about the latest episodes, viewers can be part of the show by voting, hash tagging, giving their opinions, etc.

As my mother would say this is the world we live in now. Lots of communication and conversation about everyone and everything – for better or worse – and nothing is changing anytime soon. For me and my business, social media is an extraordinary tool that I enjoy using but not abusing. For example when I post a photo of my dog Sedona hiking in the mountains I usually use an Instagram filter, maybe a #mountainliving hashtag and then use my iPhone to post simultaneously on Facebook and Twitter.

Hashtag give me a break! That’s abusing social media and it looks ridiculous.

It will be interesting to see how media sources continue to use social media. Maybe we should start calling it business media? The news, magazines, television and radio are already deep in the social media trenches and with how quickly things change in this world they have to be. Television news reporters are now required to tweet as part of their job descriptions and so many companies, regardless of size or stature, have social media pages. And they should. It’s a free and widely-used and viewed way of getting the word out. And it’s fun! #thanksforreading