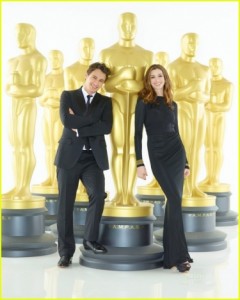 Is it me or was this year’s Academy Awards ceremony a little bit on the boring side?  While I must admit that my negative attitude could be the result of me losing my Oscar pool by one stupid category, I still think that this year’s ceremony was missing something.  Or maybe a few things.  Where was the drama?  The amazing dresses?  Sure there were some beautiful pieces worn by Jennifer Hudson, Penelope Cruz and of course Anne Hathaway but I still think Hollywood’s finest were going through the motions.  Clearly I can’t get enough of Jeff Bridges or Robert Downey Jr. but I seriously thought the stars were going to bring more of their A-game to Hollywood’s biggest night.  Here are the highs and lows:

-I was excited to see James Franco and Anne Hathaway double team the Oscars but it was Hathaway’s show.  Did Franco hit some pineapple express on the bong before going on stage?  He could barely open his eyes and acted as if this gig was just another day on General Hospital while Hathaway worked overtime to be fun, clever and cute.

-Kirk Douglas – Tough to watch but he was very funny.  Exploitation or giving a true legend the chance to be in front of his fans?

-Melissa Leo – Congrats!  The Fighter was one of my favorite movies of the year – in fact I thought it was one of the best movies I’ve seen in a long time – and Leo was one of the reasons it was so good.  Way to drop the “F” bomb in front of millions of people.  Alice Ward would be proud.

-Why were Josh Brolin and Javier Bardem dressed like twins?

-Loved David Seidler’s speech when he won Best Original Screenplay for The King’s Speech.  I felt for him just like I felt for Colin Firth’s character.

-Anne Hathaway is a triple threat – a great actress, funny and she can sing!  J-E-A-L-O-U-S!

-I liked the idea of the history theme but it felt forced.

-I love that Robert Downey Jr. is not afraid to laugh at himself – he is fantastic in every way.

-Loved Tom Hooper’s mom story when he won Best Director.  Is it me or does he kinda look like James Cameron?

-It doesn’t get any classier or more legendary than Eli Wallach.  (See The Holiday circa 2006).

-Always happy to see Jeff Bridges – so cute and so cool.  And yes, I realize he’s old enough to be my father but whatever – he’s awesome.

-Is it me or does Sandra Bullock get funnier and cooler every year?

This year was interesting as there were so many quality movies to choose from – my favorites were without a doubt The Fighter and Social Network – but I really wish that Oscar night had done the movies justice.  I’m thrilled that Christian Bale won for Best Supporting Actor – he was the force of that movie – but I’m honestly over seeing Best Actress winner Natalie Portman’s face.    Maybe next year Hathaway will host the Oscars on her own and maybe cinema’s most dramatic people will actually show some more emotion.