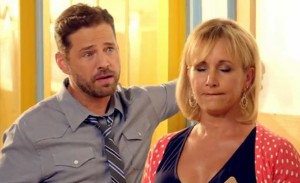 Not only are they playing school teachers but Andrea finally confesses that she loves Brandon! And the look on her face when she does is priceless. Trust me, if you were ever a 90210 fan you will get a huge kick out of the 30 second spot:

No stranger to going back to the 90s, Old Navy has also used Blossom stars Joey Lawrence and Mayim Bialik in its ads, along with New Kids on the Block’s Jordan Knight. Knight’s commercials are short, but very funny music video/jingle parodies:

Its fun seeing the television stars I grew up watching – especially now that they are in their 40s! Some look better than others but you can’t mistake those faces…