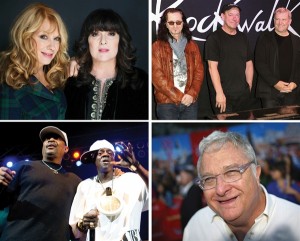 Exemplifying how no good deed goes unpunished, when it comes to the Rock & Roll Hall of Fame there is always drama. While fans are bitching that their favorite band wasn’t chosen, there are always inductees who aren’t speaking to each other or are refusing to show up or perform.

Last year was a nightmare for the Hall of Fame as Axl Rose backed out days before the event, Rod Stewart contracted strep throat and was unable to fly out for a planned reunion with the Faces, late Beastie Boy Adam Yauch was ill and unable to appear with his band mates (he passed away between the time the actual ceremony took place and the broadcast) and both Red Hot Chili Peppers guitarist John Frusciante and Guns N’ Roses guitarist Izzy Stradlin stayed home. What a shame all of that was considering what an amazing year it was for the Hall of Fame.

This year the show will be broadcast on May 18 on HBO and things should go a little smoother since every living inductee is set to attend this year and onstage reunions are possible.

Foo Fighters members Dave Grohl and Taylor Hawkins will induct Rush, Don Henley will do the honors for Randy Newman and Spike Lee and Harry Belafonte will induct Public Enemy.

Performances by this year’s living inductees:

Rush (possibly with Grohl and Hawkins), Public Enemy (with DJ Terminator X), Randy Newman (with John Fogerty and Jackson Browne) and Heart (lineup is not certain).

Performances in honor of deceased inductees:

Christina Aguilera and Jennifer Hudson will sing in honor of the late Donna Summer and Gary Clark Jr. and John Mayer will pay tribute to the late blues great Albert King. Usher will perform a tribute to Quincy Jones and Cheech and Chong will induct producer Lou Adler in honor of both artists’ Lifetime Achievement Awards.

Although I think the Rock & Roll Hall of Fame is very cool and a huge honor, as time goes on it the powers that might want to rethink their process when it comes to this event. For example when asked to reunite with the classic 1970s lineup of Heart, Ann and Nancy Wilson declined because they have been playing with their new band for a longer period of time. Fair enough –I understand Heart’s position and I understand the Hall of Fame wanting the original members. But as years go by the past probably seems less and less important to the artists still playing. While this is meant to be a celebration of the influence and significance of the artists’ contributions to the development and preservation of rock and roll, artists aren’t eligible for induction until 25 years after the release of their first record and as we know a lot can happen in 25 years. Like I said I can understand both sides – some people don’t want to dip into the past but others can argue that the Hall of Fame is all about music history. Either way this is a broadcast I never miss and with the eclectic group of inductees this year I’m assuming history will be made on that stage.

Side note: While everyone seems to be excited for this year’s diverse lineup, others are already talking about next year as Nirvana will be eligible for induction (yeah, that makes me feel old too) since the band’s debut single “Love Buzz” was released in 1988.