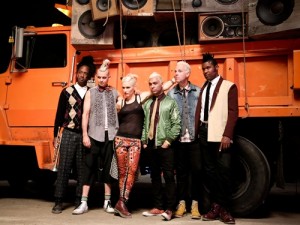 After more than a decade of no music from No Doubt, one of my favorite bands is back with a new song, a great video and a new album, Push and Shove, slated to drop September 25. “Settle Down” is the new single and it’s the first song in a long time that reminds me of old school, Tragic Kingdom-era No Doubt. You remember that album right? It spawned seven singles, earned two Grammy nominations and sold over sixteen million copies worldwide.

“Settle Down” brings No Doubt back to their roots – lots of upbeat sounds and even some help from their Rock Steady reggae friends Bounty Killer. In the video, members of No Doubt reassemble in the form of a trucking convoy, meeting up to perform the bouncing new cut in the parking lot of the coolest, most rocking truck stop you wish actually existed. The idea is that the band members meet up again after living their separate lives for the last 10 years. It’s definitely a reunion you want to be part of so it’s nice to know that we will get a chance to hear new music this fall.

Gwen Stefani, Tom Dumont, Tony Kanal and Adrian Young look like they’ve been drinking from the same fountain of youth and I love that after all these years they still have their own innovative style. Also, the video is beautifully shot and choreographed – lots of bright colors and enticing dance beats that remind the audience why this band has stood the test of time. Back when videos mattered more No Doubt were known for their visual creativity and clearly they haven’t lost their touch. Running over six minutes long, the video and the song complement each other well – they are both fun and make you want to watch and listen again and again.

Welcome back No Doubt! We’ve missed you.

Check out the video here: http://www.youtube.com/watch?v=Pb_zZ3xItPI