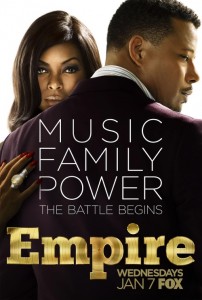 It’s always nice when a new year starts off with quality, well-written television shows. This week I watched two very different pilots of shows that were endlessly marketed during the holiday season and was thrilled that they were both excellent:

Empire – Although it’s no surprise that a show about the record business caught my attention, I wasn’t totally sure about this one because it looked like it might glamourize the hip hop music world in the wrong ways. The two people who convinced me to tune in were lead actors Terrance Howard and Taraji P. Henson because they are both Academy Award nominees and I thought they were great together in Hustle & Flow. After seeing the previews I read the premise and realized it sounded interesting: A family in the music business; patriarch finds out that he has ALS and needs to choose one of his three sons to run the company; William Shakespeare reference to King Lear; matriarch getting out of prison after 17 years. Sounds like lots of room for a character-driven, music-laden drama with original music written by Timbaland sung by actors who can actually sing! Yeah!

So far so good. Henson is a force as matriarch Cookie and Howard is as tough as he is talented as Lucious Lyon. (And don’t kid yourself because that last name – pronounced “lion” – definitely has seriously meaning as do those double L’s).  The three sons couldn’t be more diverse as the eldest son Andre is the business-minded CFO who is married to an Aryan woman, the middle son Jamal is the most talented, gay and shunned by his father and the youngest, Hakeem, is the epitome of why celebrity offspring can be the most obnoxious species in Hollywood.

A lot happens in the first episode – we learn a lot from the extremely vivid flashbacks that feature Lucious and Cookie’s drug dealing past and the start of Empire Records (their record company, not the 1995 movie I love).  The viewer also learns that the Lyon family has a lot of secrets that could ruin the company’s chance of going public. Hopefully the show will be as alluring as the pilot, focusing more on the family and the music rather than relying too much on glossy dramatics.

Now on to a completely different show with an intriguing pilot:

Hindsight – Traveling back in time has been prevalent in pop culture for decades – Back to the Future, Predestination, About Time, Men in Black, Hot Tub Time Machine and that Doritos commercial with the blonde kid and the dog. Time travel is everywhere so when I heard about Hindsight it didn’t really catch my attention until I found out that it was going to be VH1’s first non-reality show ever. Although I love Behind the Music episodes, the rest of the VH1 reality shows are awful i.e. Ton of Cash, Hogan Knows Best, Mob Wives, Love & Hip Hop, etc. and the list goes on and on.  So I when I realized this was actually going to be a scripted series that took place in the 90s, I was excited.

The premise is simple: Becca, our charming leading lady, is getting ready for the rehearsal dinner for her second wedding but is having second thoughts. We meet her judgmental mother, her re-married father (with young, pregnant new wife in tow) and her brother who she adores. We also find out that she hasn’t spoken to her best friend in 10 years. Next thing she knows she’s in an elevator-type time machine and wakes up in 1995 on the eve of her first wedding and wonders if she should call off her first wedding and change the course of her life for the better. While this premise sounds ridiculous and seen-it-before-esque in writing, the characters are so well-written and well-acted that it’s hard to take your eyes off the screen.

And of course it helps that I love 90s music and this pilot featured some gems: Ace of Base, Alanis Morissette, Snoop Dogg, Spin Doctors, etc. There’s also the fashion which is pointed out by our leading lady as she gets dressed to see her groom to be: baby doll dresses, knee socks, crop tops, clogs. It’s awesome! We are also reminded that 1995 was a time before cell phones, you could smoke in a bar, people carried pagers and Melrose Place was a hit show – ahh the good old days! Hopefully the fun 90s nostalgia will continue to be well-used and won’t turn into a novelty that overstays its welcome.

Just like Empire, Hindsight provided a great pilot that I hope can be followed up with a great show. While these shows are dissimilar in some ways, they are both about relationships of all kinds – significant others, siblings, family, friends and professional and they both feature smart writing with exciting actors with music and movie references that are both thoughtful and funny. Already added both to my DVR series recordings and am looking forward the sophomore episodes this week!