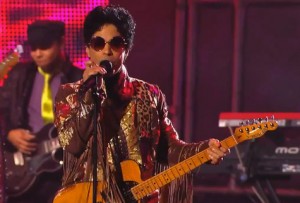 While the venue might have been a strange choice, Prince (no stranger to strange) chose the outside stage on Jimmy Kimmel Live last night to debut his new single called “Rock & Roll Love Affair.” And what a debut it was. For someone who has been part of the music industry for decades, he performed that song like it was his first time on stage – or like he was on stage as a new kid in Purple Rain.

Clad in a gold fringe jacket and yellow bellbottoms with a mini-afro and 70s shades, Prince, who was backed by a full band, put on an exciting, jangly show full of funk, soul and brass that was reminiscent of 70s-era Stevie Wonder or Sly & the Family Stone.

Some of his fun, new lyrics that went with the exuberant performance:

Prince, who is considered one of the best guitarists of all time, sold over 80 million copies worldwide, has won seven Grammy Awards, a Golden Globe and an Academy Award. He was inducted into the Rock and Roll Hall of Fame in 2004, the first year he was eligible, and is ranked number 27 on Rolling Stone’s list of the 100 Greatest Artists of All Time.

While Prince hasn’t been the friendliest music icon in the past – in 1991 he changed his name to an unpronounceable symbol and in 1994 he began releasing new albums at a faster pace to remove himself from contractual obligations to Warner Bros – no one denies his talent. In 2000, he began referring to himself as “Prince” once again and in 2004 I was lucky enough to see him perform live as part of his Musicology Tour.

Although there has been no official word of a new album, with a song as good as “Rock & Roll Love Affair” I’m assuming new material can’t be that far behind. Cross your fingers because if Prince has been spending time in the studio we’re going to want to hear what he comes up with.