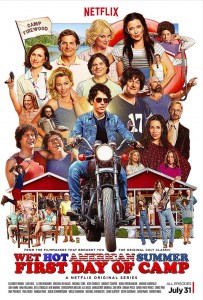 Have you seen the movie Wet Hot American Summer? Most likely the answer is “no” unless you’re a cult movie fan or you were an early follower of the now-comedic royalty that made up the 2001 ensemble cast. Featuring Janeane Garofalo, David Hyde Pierce, Molly Shannon, Paul Rudd, Christopher Meloni, Michael Showalter, Elizabeth Banks, Michael Ian Black, Bradley Cooper and Amy Poehler, among others, the film is about the last day of summer camp in 1981 at the fictional Camp Firewood. Based on experiences the writers had at summer sleep-away camps in Maine and Massachusetts, the movie’s premise was to make fun of and pay tribute to summer camp comedies like Meatballs (1979), Sleepaway Camp (1983) and Indian Summer (1993). Even with the powerhouse cast, the movie was initially a commercial failure but became a cult classic.

I saw Wet Hot American Summer a few years after it came out and I remember thinking that although it had some funny parts it was just ok. That being said, as someone who spent several summers of my youth at camp, I did appreciate all the summer camp parodies and I loved seeing Garofalo and Shannon (the movie’s biggest stars at that point) play camp counselors. Now that Cooper, Rudd, Banks and Poehler are a few of my favorites, I really should watch the movie again especially the scene where all the counselors go “into town” and are absolutely out of control. They drink, do drugs and basically act like animals being let out their cages. It’s amazing.

Another funny aspect of the movie is in 2001 most of the actors were in their 30s and early 40s even though they are supposed to be playing teenage counselors. No one ever talked about the age discrepancies in the movie and no one seemed to care. Fast forward 14 years later and Netflix decided to revisit the cult classic by creating a prequel that stars everyone from the original cast. Now those actors are in their 40s and early 50s playing teenagers and again no one cares. It’s brilliant! Released at the end of July, the Netflix-created, eight-episode prequel series is called Wet Hot American Summer: First Day of Camp and so far it’s a lot of fun. I’ve watched the first three episodes and although the plotlines are not rocket science, watching these actors play Camp Firewood counselors like it’s 2001 is extremely entertaining. Also, the additions to the cast are fantastic: Jon Hamm as a hired assassin, Kristen Wiig as a snobby Camp Tigerclaw counselor, Josh Charles as a Camp Tigerclaw counselor, Lake Bell as a Camp Firewood counselor and “Weird Al” Yankovic as a famous hypnotist, among others.

It’s pretty amazing that Netflix was able to get all of these actors to agree to (and find time to) do this 14 years later. While some of them do look a little older (Garofolo), others must be drinking from the fountain of youth (Rudd) because they miraculously look like they haven’t aged a day. All the numbers aside, what’s important is that the entire cast has maintained sharp comedic timing and their collective chemistry is undeniable. I’m looking forward to watching the rest of the episodes and seeing how it ends/leads up to the original movie. Welcome back to Camp Firewood y’all!