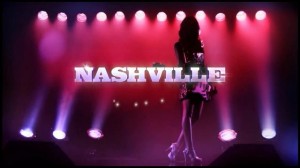 While I’m always weary to write about how great a television show is during its first season, the latest episode of Nashville solidified the fact that this show is unlike any other on TV right now.

Like I’ve said in the past, music is the backbone of the show and when you decide to write about “Music City” you better find real musicians and film on location and Nashville is doing just that. T-Bone Burnett is in charge and it shows because all the actors can sing and play their instruments well and it seems like every episode reveals more talent and new material.

In addition to quality music that is both innovative and authentic, the dramatic appeal of the show is unprecedented due to the dynamics between each of the characters. There is jealousy between living legends and new stars, drug and alcohol addiction, family secrets and demons that run deep, relationship history that is constantly creeping back into the present, people who are so hungry for fame they will do anything to achieve it, political agendas and so much more.

That being said what keeps this show from nighttime soapville is the drama is believable. You feel their pain and their need to smile through their issues to give the people what they want – great music. And even with all the drama the complexity of the show and its characters is what keeps viewers excited for more:

-Queen of Country Rayna James is back on the top of the charts with a number-one single she wrote with Country Pop Princess Juliette Barnes.
-Rayna is getting more attention so Juliette is jealous – something that is very clear even when they are on stage.
-Deacon, Rayna’s former boyfriend/band leader/guitarist extraordinaire, quit his new band after the lead singer tried to assault his niece Scarlett and is now on a downward spiral. We find out that he’s been sober for 12 years which took him five stints in rehab to accomplish all of which Rayna paid for and by the time he got out she had already met and married Teddy.
-Teddy, now Mayor of Nashville thanks to Rayna’s conniving and politically-charged father and sister, is always playing second to fiddle to either his wife or the other men in her life i.e. Deacon or new collaborator Liam (who is now history because he lied to Rayna).
-Wanting to know once and for all if his wife forgives him for his indiscretions (lying and stealing), Teddy keeps asking Rayna what the deal is but she doesn’t have an answer for him. He’ll have to wait until the next time she passes through Nashville since she is on tour.
-Juliette’s mother is almost finished with rehab and is looking more and more like a real human rather than the methed-out, screaming, tweaking person we met at the beginning of the series. (Thank you for small favors).
-Scarlett and Gunnar continue to write and play fabulous songs and are now teaming up with Avery’s former band.
-Willing to do anything to garner fame, Avery has burned every bridge – including breaking up with Scarlett and leaving his best friends/band mates in the dust – and even though he now has a song on the radio and a new car he has no one to celebrate with. He is a horrible character and needs to go – he is too awful to bear.
-Gunnar’s convict brother is now a fugitive and poor Gunnar is so consumed with what seems like a shame/guilt/worry combo that he takes out his feelings about his brother on Scarlett. Lucky for him she’s the nicest most naïve person on the planet.
-The episode ends with Deacon running to the Rayna/Juliette plane as a last minute addition to Juliette’s band. Between the shocked look on Teddy’s face from inside the airport and Rayna’s from inside the plane the next episode (which we have to wait two weeks for – dammit!) should be interesting to say the least.

If you are a music fan or just a fan of good television, catch up on the show and while you’re at it download the soundtrack. It’s incredible.