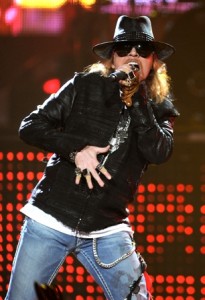 Side note #1: When I saw Prince and Eric Clapton they were not technically part of a band but they had bands backing them so I consider them front men. Plus, they were so good that it would be a crime to keep them off this list.

Side note #2: Putting these guys in order was extremely difficult so I would love to hear your opinion and see your list.

10) Scott Weiland (Stone Temple Pilots and Velvet Revolver) – Unfortunately, when most people hear the name Scott Weiland, what most likely comes to mind first is the fact that he is a severe drug addict. That’s a shame since Weiland is one hell of a singer. Clad in leather pants and his signature police officer hat and aviators, Weiland put on quite a show back in 2005 when he was singing for Velvet Revolver and sharing a mic with Slash. I will never forget that show as Weiland and Slash were a force to be reckoned with.

9) Eric Clapton (former band was The Yardbirds and Cream, among others) – An epic show that included some serious instrumentals from a man who is top ten on so many lists its ridiculous. Clapton has 17 Grammys and it showed that night at Pepsi Center eight years ago – he is brilliant.

8) Prince (former band was The Revolution) – Although Axl Rose is notorious for his behavior, Prince is definitely in the same realm. Remember when he asked people not to address him by anything other than a symbol? Get a grip. But Prince is an amazing performer as he grinds on his guitar and/or mic stand while dancing around in his glittery heels. It’s a sight to see for sure.

7) Tom Petty (The Heartbreakers) – I love that not only is Petty not afraid to play his hits, he also plays them like it’s the first time. I’ve seen him in all kinds of venues – Red Rocks, Mile High Music Festival, etc. – and he never ever disappoints. He’s always excited and the crowd follows his lead.

6) Mick Jagger (The Rolling Stones) – One of the most famous bands in rock & roll history did not disappoint. 1997’s Bridges to Babylon tour at the old Orange Bowl stadium was a night I will never forget. The way Jagger moved across the enormous stage was incredible and of course his synergy with Keith Richards was extraordinary.

5) Steven Tyler (Aerosmith) – That screech paired with his harmonica playing skills and the scarves on his mic stand set Tyler apart from so many front men. Like Jagger and Richards, Tyler and Joe Perry were meant to be. That being said too many people bring up Jagger comparisons rather than seeing Tyler for who he is – the epitome of what it means to be an American rock & roll singer.

4) David Lee Roth (Van Halen) – “Diamond Dave” could also be called “Acrobatic Dave” as he bounced around that stage like a man on a mission. He was in constant motion – dancing, jumping, jiving and flipping. It was like rock & roll Cirque du Soleil. Every time I thought I’d seen the best move he brought another one – oh yeah and Eddie Van Halen was there too. What a show.

3) Dave Grohl (The Foo Fighters) – You know someone is a great front man when they could do the whole show by themselves; that is Grohl in a nutshell. Whether he’s playing Red Rocks or the Pepsi Center he bleeds the best combination of all: charisma, talent and rock & roll.

2) Brian Johnson (AC/DC) –When does replacing the lead singer of a band ever work? When you’re Brian Johnson and you sing for AC/DC. After original singer Bon Scott died in 1980, Johnson took over and the transition was so seamless it was like nothing ever happened. Just like I’m sure Scott did, Johnson brings so much vigor to his shows it’s unbelievable. And with an unmistakable voice like that he will always be unstoppable.

1) Axl Rose (Guns N Roses) – Say what you want about his antics including, but not limited to, his inability to arrive anywhere on time, his prima donna attitude and inability to get along with Slash. None of it matters because Axl Rose can put on a rock & roll show. I’m happy to report he left his bullshit at the door on December 11, 2011 as he was on time, played an epic three-hour show, brought unstoppable energy and featured a wardrobe I wanted to steal. Three hours of awesome I will never forget from the best rock & roll front man of all time.