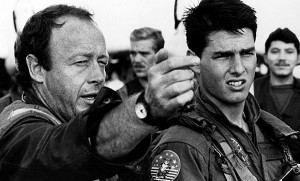 It is no secret that I’m a Cameron Crowe fan.  He has directed some of my favorite movies of all time i.e. Almost Famous, Jerry Maguire and Fast Times at Ridgemont High and was arguably one of the best Rolling Stone writers of all time. But today I learned that I have a second favorite director and his name is Tony Scott. Why am I a Tony Scott fan?  Because he directed a few more of my favorite movies: Top Gun, True Romance and Enemy of the State. After all these years of loving those three films, how is it possible that I’m just now finding out that Scott is the genius behind them and many others?

-The Scott family has some serious talent – Tony’s brother Ridley directed a long list of films you might have seen including Alien, Thelma & Louise, best picture Oscar-winner Gladiator and Black Hawk Down.

-These talented brothers have more than just movies on their resumes. They are also two of the executive producers for what I consider to be one of the best shows currently on television –The Good Wife.

Just as I was getting excited about my new second favorite director and what his next project would be, I was extremely disappointed to learn that in 2012 he committed suicide by jumping off the Vincent Thomas Bridge in San Pedro, California. So sad and a terrible waste of talent since clearly Scott brought so much originality and intelligence to everything he created. His extraordinary eye for what would be most entertaining for the audience was remarkable and it’s a shame that we will never see anything new from Mr. Tony Scott.