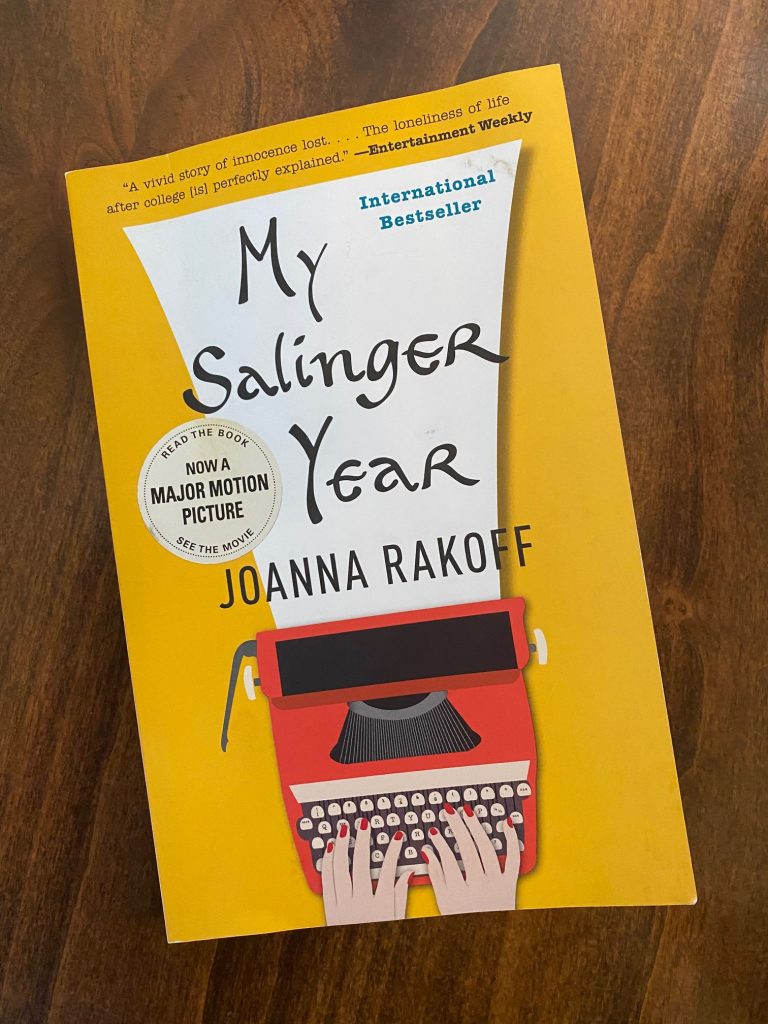 What’s interesting about memoirs that chronicle a writer’s experience becoming a writer is that if the bulk of the story is about them struggling to “make it” we already know the ending. Kind of like Titanic. We know how this goes. But, if the story is good enough, it still keeps the reader on the edge of their seat.

As I was reading My Salinger Year, I knew that author Joanna Rakoff became a successful author because the book in my hands said “international bestseller” on the cover and the book was adapted into a movie last year. But she’s a good enough writer that I wanted to know more. Also, Rakoff was 23 years old when she got her first job in the writing world which resonated with me because that’s when I got my start.

Although the book is about working at the literary agency that represented the notorious J.D. Salinger, it’s really about being an ambitious, aspiring writer in New York City embarking on her first job. Rakoff has this romantic notion that fledgling writers must struggle in NYC before making it big so that’s what she does. She lives in a horrible apartment with no sink in the kitchen with a boyfriend who doesn’t want to bring her to his best friend’s wedding. Her saving grace is her new job that eventually opens up opportunities in the strangest ways.

It’s odd that the entire time she works for the Agency she’s with a boyfriend that she kind of can’t stand. I understand that it’s part of her journey to find herself but I’m not sure whether it lends to the narrative or hinders it. As for her job, it’s interesting that her boss never gets a name. Everyone refers to her as “your boss” and Rakoff refers to her as “my boss.” If the worry was protecting people’s identities, why not use a pseudonym? Same with saying “the Agency” rather than giving it a name. Why?

One of the funniest scenes in the novel is when “her boss” at “the Agency” finally allows a computer in the office. Because of the boss’s resistance to technology, the Agency primarily uses antiquated technology like typewriters and Dictaphones which is ridiculous. She says, “I don’t want people on the World Wide Web all day, doing whatever they do.” When I read that sentence, I laughed out loud. In the next sentence, Rakoff cleverly describes her boss’s hand movements: “She waved her hands around, to indicate the utter craziness that was the Internet.” The short but memorable scene is gold.

In addition to typing on a typewriter and using a Dictaphone, Rakoff is tasked with reading letters written to Salinger from people who live all over the world. Notoriously reclusive, Salinger doesn’t want to hear from anyone, but Rakoff reads through the letters and feels a responsibility to respond. “Why could I not leave these letters alone?…The answer was plain: I loved them…They told me – Salinger – things I knew, for sure, they’d never told anyone else.” Because the letters are telling, insightful, and sometimes scary, she is warned by a co-worker, “Don’t get too caught up in them.”

It’s clear that Rakoff has trouble letting the letters go because they serve as a window into these people’s lives and how much Salinger means to them. She feels obligated to take the time to write back even though she’s explicitly told not to and, although it backfires in some ways, it demonstrates who she is as a person and why the reader is on her side.

In addition to Salinger, the Agency’s other big-name client is Judy Blume who, for some reason, is treated like a second-class citizen. In fact, two people in the office ask Rakoff if she’s ever heard of Judy Blume and I, like Rakoff, can’t believe she has that conversation once – nevermind twice.

So is My Salinger Year worth reading? If you’re a Salinger fan, definitely. If you’re a writer, yes. Otherwise, it’s hard to say. I’m both so I thoroughly enjoyed the book but I wouldn’t necessarily call it a “page turner.” Either way, there is no denying J.D. Salinger’s impact on the world.

The office: “And with so many tools of efficiency from the 1950s and 1960s, it looked both charmingly archaic and spookily futuristic.”

“I didn’t want to be entertained. I wanted to be provoked.”

“In order to become part of something…I had to relinquish some semblance of myself, my own volition and inclinations.”

“No anthologies. No excerpts. If you want to read Salinger, you have to buy his books.”

“My boss – like a certain breed of adult – appeared to have never been a child herself.”

“What was the point of going to dinner – even at a cheesy, awful corporate restaurant – if you didn’t order wine?”

“Salinger was not cutesy. His work was not nostalgic. These were not fairy tales about child geniuses traipsing the streets of Old New York. Salinger was nothing like I’d thought. Nothing. Salinger was brutal. Brutal and funny and precise. I loved him. I loved it all.”

On Salinger: “The world he creates is at once palpably real and terrifically heightened, as if he walked the earth with his nerve endings exposed…And so, of course, his readers felt an urge to write back. To say this is where it hurts or here’s how you made it better.”

Salinger’s story “Slight Rebellion off Madison” was printed in The New Yorker and would later become The Catcher in the Rye.

A title of a book can’t be copyrighted because copyright does not protect names, titles, slogans, or short phrases.

Rakoff comes across a first edition of The Catcher in the Rye in an antiquarian bookshop and the copy’s price tag is $25,000.

Salinger initially used horizontal titles on the spines of his books which is odd. Either I never noticed that before, or my copies of the book were printed later and had vertical titles.

Before getting picked up by Little, Brown publishing house, someone rejected The Catcher in the Rye. I bet that person, to this day, feels like an asshole.

The main reason for the warning regarding the letters is because, after Mark David Chapman shot John Lennon in 1980 (16 years prior at the time), he sat down and read The Catcher in the Rye at the scene until he was arrested.