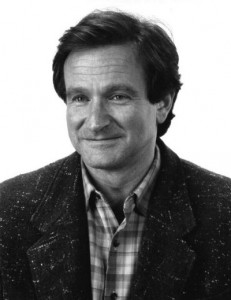 Good Will Hunting (1997) – As Will’s (Matt Damon) therapist Sean, Williams gets through to a tough kid from the roughest part of Boston when nobody else can. Sean’s sincerity and no-bullshit attitude towards Will not only intrigues the young man and entices him to talk a shrink, it also demonstrated Williams’ range as an actor. He deservingly won the Academy Award for Best Supporting Actor for a performance that made an already phenomenal film worth watching again and again.

Favorite quote: “Son of a bitch…He stole my line.”

Dead Poets Society (1989) – No one will forget the teaching methods of English teacher John Keating. Played brilliantly by Williams, this character has inspired so many people to teach the importance of language and reading. Keating motivates his students (which included then-unknown actors Ethan Hawke and Josh Charles) to think outside of the box and to seize the day. I use his lines all the time when tutoring kids in English and writing at Colorado Mountain College including telling them not to use “very.” I tell them: don’t say something is “very good” – instead say it’s excellent or exciting or amazing. Less is more.

Favorite quote: “So avoid using the word ‘very’ because it’s lazy. A man is not very tired, he is exhausted. Don’t use very sad, use morose. Language was invented for one reason, boys—to woo women—and, in that endeavor, laziness will not do.”

Mrs. Doubtfire (1993) – No stranger to wearing crazy outfits for the sake of comedy, Williams earns laugh after laugh for his portrayal of elderly nanny and housekeeper Mrs. Doubtfire. Playing dual roles – Daniel the devoted father and voice actor who is getting a divorce and Mrs. Doubtfire – Williams embodies both the lighthearted and serious aspects of a father who, in his divorce proceedings, is granted zero custody of his three children.

Aladdin (1992) – As a master of voices, Williams was a brilliant choice for the role of Genie in this classic Disney film. With the powers to change himself and others into anything he pleases, Genie’s lines are perfectly delivered by Williams who apparently improvised many of them. While Genie is meant to serve as the comedic relief in the film, Williams also cleverly brings out the compassionate side of the character.

With so many quality one-liners it’s hard to choose just one favorite quote but here are a few of them:

“I can’t bring people back from the dead. It’s not a pretty picture. I don’t like doing it!”

“Are you looking at me? Did you rub my lamp? Did you wake me up? Did you bring me here? And all of a sudden you’re walking out on me? I don’t think so, not right now. You’re getting your wishes, so sit down!”

“Thank you for choosing Magic Carpet for all your travel needs. Don’t stand until the rug has come to a complete stop. Thank you. Goodbye, now. Goodbye. Goodbye.”

Hook (1991) – Last but not least this one really brings me back because I watched it so many times as a kid. While this film features big names like Dustin Hoffman and Julia Roberts, a creative storyline and sets and special effects that are still amazing 23 years later, this movie  belongs to Williams. As a middle-aged Peter Pan who is a workaholic, is constantly stressed out by his wife and kids doesn’t believe in anything, we watch as Williams transforms from an out of shape lawyer to a nibble guy ready to battle anyone to save his children.

Favorite quotes: “I do not believe in fairies! Oh my God, I think I’ve killed it.”