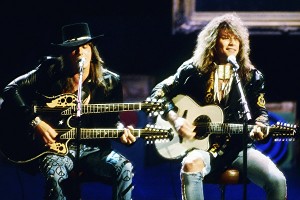 In my experience there are two kinds of ballads: The kind done by loud rock & rollers who want to slow it down for a song or two and then there’s everyone else.

Spoiler alert! I prefer the metal “power” ballads! But of course there are some really good ones not done by my favorite guys in leather.

Another point I want to make is that a ballad does not necessarily indicate a slow song or a love song. To me, a ballad is a slower song that still packs the punch of the louder and faster songs done by the band or artist in question.

So, here’s the list I came up with to kick off 2012 – there are 10 songs in each category with no band or artist repeats.

*Disclaimer: This list purposefully does not include “Stairway,” “Free Bird,” “We Are The Champions,” “Hotel California,” Journey, the Beatles, divas such as Mariah or Whitney or any songs done by a male/female pair. For the best songs by male/female pairs see my August 31 post entitled “Coed Collaborations.”