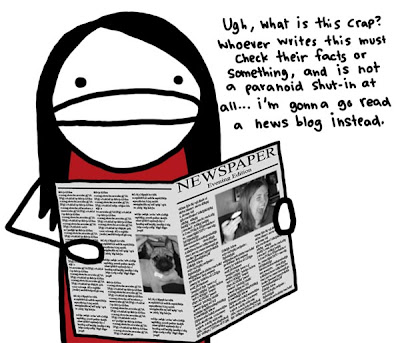 The University of Colorado at Boulder announced two days ago that they are looking into shutting down the existing journalism school so they can create a new program that will address “the realities of modern media communication.” Apparently, they have asked the Academic Review and Planning Advisory Committee (ARPAC) to look into it starting September 1. The ARPAC must then present a report within 60 days and a recommendation to the chancellor will be given 30 days later. So in less than three months CU’s entire School of Journalism and Mass Communication could be history because the powers that be think that the digital age has shaken journalism so hard that we can’t possibly continue the way we have been or just make a few tweaks? You know what? I think that’s bullshit.

No matter what happens with print media we still need people who know how to write and communicate properly and shutting down or “reconfiguring” (or budget cutting) isn’t the answer. People have been saying that newspapers and magazines will be the equivalent of ancient artifacts for years now and as we all know, that’s not the case. While there is no question that technology, the Internet and even blogging have forced us to rethink what it means to be a journalist, some people still want to read the written word on something tangible. Last time I checked, bookstores and newsstands still carried Rolling Stone, TIME, Newsweek, People, The Wall Street Journal, etc. And you know why? Because people spend enough time looking at their computer screens that when they want to read something for pleasure they want to hold it in their hand while sitting on their patio, on an airplane or even on their couch. Not everyone is interested in reading 5,000 word articles on a computer screen.

I find it interesting that all of this is going down at CU while the journalism school is going through the reaccreditation process. Apparently the school’s record over the past six years is subject to review and that accreditation teams are interested in whether schools are considering new ways to teach media. While the chancellor did announce that regardless of the outcome, all undergraduate and graduate schools who are currently admitted to the School of Journalism and Mass Communication will be able to finish their degrees what does that mean for alums who graduated several years ago? I have many friends who have degrees from CU’s journalism school so what does that mean for them? Will their degrees have less value if the very school they earned their degree from no longer exists? And will this end with journalism or will the English department be next?

I hope CU knows what its doing because no matter what happens in the writing world in the future we will need talented writers. Of course I am very aware of the changes that are happening and will continue to happen but there has to be another way. Schools all over the country are “reconfiguring” in order to “respond to the modern dilemmas of journalism.” What dilemmas are we talking about? If schools continue to shut down journalism and writing programs then our biggest dilemma will be how to deal with college graduates who don’t know how to string sentences together or convey a message or an argument. What will we do then?