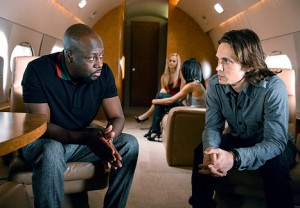 If you’ve been paying attention lately you’ve probably noticed that there have been quite a few musicians doing something they don’t always do well – act. On Nashville former Fugee and triple threat rapper, singer and record producer Wyclef Jean is playing the head of music label. Clad in classy suits, his character is trying to get Nashville acts to check out the “ATL” scene and with the allure of his private planes and big promises it looks like he will succeed. For Jean, the Nashville stint is his latest on-screen role following Third Watch in addition to work on soundtracks for Glee and 30 Rock.

On the other side of the tracks, Sons of Anarchy added Jane’s Addiction guitarist Dave Navarro as a gang member who is tied to Jimmy Smith’s character. Jane’s Addiction also did a cover of the Rolling Stones song “Sympathy for the Devil” for the season five finale.

While Jean and Navarro have small roles on their respective shows I think their presence alone provides Nashville (especially as a new show) and Sons of Anarchy (they don’t just let anyone don leather and tattoos) a lot of cred if the actors do a good job. And they have so far.

Unfortunately not all musicians belong on-screen. When Alanis Morissette played a hippie bisexual weirdo who kisses Carrie Bradshaw on Sex and the City it was a very strange performance. I’m a huge fan of Alanis’s music but she couldn’t have been more awkward in that episode. Meanwhile, when Chrissie Hynde of the Pretenders was on Friends she was great! Playing Phoebe’s music competition at Central Perk, Hynde loses because she didn’t play and sing “Smelly Cat” as well as Phoebe. Clearly a joke since Phoebe can’t sing and Hyde is such a well-known name in the music business, Hyde played the character perfectly and turned in a very funny performance.

It will be interesting to see if Jean and Navarro continue their respective runs and if their roles become more prominent. I hope so because if you’re going to bring that kind of star power onto your show you might as well get your money’s worth.