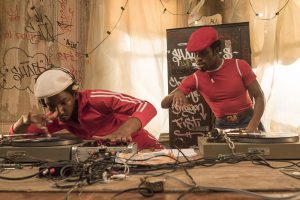 Over the last few years there have been a handful of shows about the music business that continue to resonate with me due to their exciting and realistic content and, most notably, their original songs. A few examples:

While it’s been exciting to hear and then play those new songs on the radio, the latest television show to not only provide new music but also teach me something new about music history is Netflix’s The Get Down. Set in the South Bronx in the late 1970s and created by Baz Luhrmann (known for Romeo + Juliet, Moulin Rouge!, and The Great Gatsby) and Stephen Adly Guirgis, The Get Down explores the rise of music in an environment that clearly needed creativity to survive.

“Part One” of the The Get Down (a reference to what the Bronx kids called hip-hop when the genre was in its infancy) consists of six episodes that center around writer and lyricist Ezekiel “Zeke” Figuero (Justice Smith), disco queen hopeful Mylene (Herizen F. Guardiola), and Shaolin Fantastic (Shameik Moore) who is an aspiring DJ and protégé of the now legendary Grandmaster Flash. While the rest of the characters and intertwined plot lines are too intricate and numerous to explain, one of my favorite characters is definitely Jimmy Smits as Francisco “Papa Fuerte” Cruz, a Bronx politico who some refer to as a “ghetto pimp” because he fights for his impoverished community by convincing city officials to promise funds for jobs, houses, and healthcare. Who knows where Cruz’s money comes from but he clearly has more than enough of it and seems to understand how to get exactly what he wants. Seeing Smits in 70s suits and sunglasses is amazing – he wears the clothes and his character well.

Overall, the ensemble cast of characters is as vibrant as the music and the Spanglish spoken by almost everyone involved. Additionally, Luhrmann’s colorful but realistic backdrop depicts a neighborhood full of gifted kids who either need to help save their community and or escape it. By blending this backdrop with actual archival footage of the socioeconomic and political climate of the time, Luhrmann juxtaposes horror with creativity. He depicts rampant drug use, burning buildings, and the infamous New York City blackout (that plagued the summer of 1977 with riots and looting) right along with the extraordinary musical talent that bursts out of every graffiti-covered corner.

Adding another layer to the story is Luhrmann’s decision to frame episodes with footage of present-day Zeke performing at an enormous arena which tells the audience that his rhymes were enough to get himself out of the Bronx and become a huge hip-hop star by rapping about this past. But those are only glimpses because the viewer is immediately taken back to the 70s when disco was so big that the genre gave the record industry “its most profitable year to date.” Meanwhile hip-hop was on the cusp as Grandmaster Flash was hosting underground dance parties where he scratched records (something that never had been done before) and searched for “wordsmiths” who could rap over the music he sampled. According to the show, Flash’s mixtapes were so valuable that hustlers would steal them and then sell them on the black market for a high price.

It’s no surprise that the show’s soundtrack is spearheaded by Flash himself, Kurtis Blow, and Nas because the music is incredible. By showcasing lyrics and beats that are raw, exciting, and eloquent, this trio of hip-hop greatness has helped create music scenes the viewer looks forward to every time. Download “Set Me Free” and “Get Down Brothers vs. Notorious 3” to hear the autobiographical words that could have been written almost 40 years ago and the exceptional sound that characterized the beginning of a genre. I’ve never been a fan of disco (and don’t have as much knowledge about early hip-hop as I do about early rock and roll) but I’ve been excited to learn about all of it by watching The Get Down. Tune in and you’ll see and hear exactly what I mean.