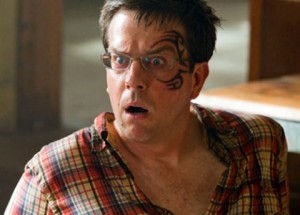 Regardless if you’ve seen The Hangover 2 yet, you know that Ed Helms’ character Stu gets a face tattoo similar to Mike Tyson’s while on a drunken bender in Bangkok.  What you may not know is that it’s causing all kinds of trouble.  Apparently Warner Bros. filed court papers this week indicating they intend to digitally alter the tattoo when the movie is released on DVD.    Tattoo artist S. Victor Whitmill, who gave Tyson the Maori-style tattoo that the film references, sued the company for copyright infringement.

According to Entertainment Weekly, in order to prevent Whitmill’s request for an expedited trial, lawyers for Warner Bros. said: “If the parties are unable to resolve their dispute, Warner Bros. does not intend to make any use of the allegedly infringing tattoo after the film ends its run in the theaters because Warner Bros. will digitally alter the film to substitute a different tattoo on Ed Helms’ face.  As a result, there is no reason for the highly accelerated trial Plaintiff has asked this Court to hold on Plaintiff’s request for a permanent injunction.”

Hmm…sounds like S. Victor (sweet name by the way) wants to cash in on his artwork as soon as possible.  As someone who thinks that tattoos are very personal and would be none too thrilled to discover someone copying any of my tattoos, I guess I can see where the artist is coming from.  That being said it’s not Mike Tyson flipping out; it’s the artist who inked the tattoo on one of his customers.  So does it make sense to alter the tattoo for the DVD version of the film?  Won’t that completely miss the point/hilarity of the tattoo?  As of now a mediation hearing is slated for June 17 and a court date is set for Feb. 21, 2012.  I guess S. Victor will have to wait until next year to find out if his art is as coveted as he thinks.

In the meantime, I got to thinking about the significance of tattoos in movies.  In movies like Momento and Waterworld, tattoos almost served as their own characters.  In the former a man who lost the ability to make any new memories uses tattoos on himself to remember clues as he tracks his wife’s killer.  In the latter, the kanji and coordinates tattooed on the back of a young girl gives the location of the last dry land on Earth.   For other movies, tattoos are there simply to make characters look more badass – i.e. Angelina Jolie in Wanted and George Clooney in From Dusk Till Dawn.

Either way, tattoos have been used to tell stories, depict personalities and even show where a person has been.  They are a person’s history and there is no shortage of them in movies.  While some people identify with their tattoos others just view them as works of art on their body.  It will be interesting to see whether or not the courts rule in S. Victor’s favor or if they decide that he needs to get a grip.  I would love to hear what Mike Tyson thinks…