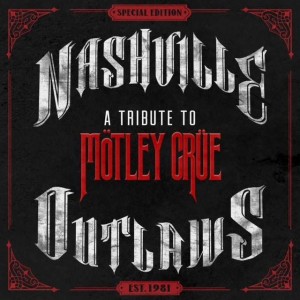 Back in January I wrote about Motley Crue announcing that they signed a formal Cessation of Touring Agreement which is effective at the end of 2015 which means this is definitely their last tour. https://lauralieff.com/the-day-hair-metal-died-sort-of/

No bullshit, no farewell tours in five years, it’s over. As someone who loves both metal and outlaw country, the silver lining to the announcement was that a country music tribute to Motley Crue would be released in conjunction with the tour. And guess what? The album is here, it’s called Nashville Outlaws: A Tribute to Motley Crue and it’s awesome!

The tough part about tribute albums is that artists and bands can go one of two ways when covering such well-known songs by such a notorious band: Either sing it straight or do your own take on it – both of which are equally ballsy. You never know what’s going to sound better.

My thoughts on this album:

-Wow Rascal Flatts I didn’t know you guys had it in you. Nice job with “Kickstart My Heart” – singing that song is no joke!
-“Smokin’ in the Boys Room” is one of my favorite songs on this album and I’m not even a LeAnn Rimes fan!
-Justin Moore did a pretty good rendition of “Home Sweet Home” but he had Vince Neil singing backup – is that fair?
-Who the hell is Lauren Jenkins? I don’t know but her take on “Looks That Kill” is awesome.
-I’m a fan of both The Cadillac Three and Brantley Gilbert but I wasn’t impressed with their versions of “Live Wire” and “Girls, Girls, Girls,” respectively. Those are two of Motely Crue’s biggest, loudest and most hardcore songs and both The Cadillac Three and Gilbert went soft. They should have gone more outlaw on such killer songs.
-No thanks Mavericks – I don’t ever need to hear your destruction of “Dr. Feelgood” again. Ever.
-I’m always drawn to females covering male singers and vice versa especially when a badass like Gretchen Wilson is singing! “Wild Side” was a perfect choice for her.
-Darius Rucker is fantastic. End of story.

Although I love the idea of country singers singing Motley Crue gems and I hope that Guns N Roses gets a country tribute also (haha yeah right) the powers that be need to be very careful with their artist and song choices. Motley Crue is serious business and always will be.