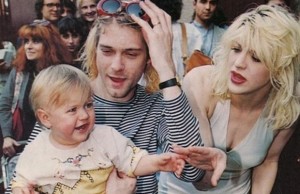 After waiting 10 days to watch the documentary I’d been reading about for over a month, I finally got to watch Kurt Cobain: Montage of Heck. Because I had already read a few articles and several stellar reviews, I knew that it was going to be excellent. I also knew it was going to be rough, raw and real. What I didn’t know was how that I would still be thinking about it the next day.

Written, directed and produced by Brett Morgen, Montage of Heck premiered at the 2015 Sundance and then was released on HBO on May 4. Nothing if not a labor of love, the documentary was in progress for eight years – starting in 2007 when Cobain’s widow Courtney Love approached Morgen with the idea. With the help of Love, daughter Frances and the Cobain family, Montage of Heck came to fruition and is the first documentary about the Nirvana frontman to be made with the cooperation of his family. Taking its name from a musical collage that was created by Cobain with a 4-track cassette recorder in 1988, the film digs deeper than any rock documentary I’ve ever seen. Instead of playing up the myth that is Kurt Cobain, it showed him as an actual human whose tough childhood would haunt him for his entire 27 years.

Comprised of footage from various Nirvana performances, unreleased home movies, recordings, artwork, photography, journals, demos and songbooks, the documentary starts from the beginning. And by the beginning I mean before Cobain was even born – with his parents Don and Wendy getting together and deciding to have a baby because that’s what people did in the sixties after they got married. Seeing footage of Cobain as a child is eerie – he is a very cute Aryan child who has a guitar in his hand starting at a very young age. The eeriness continues when this sweet kid says in his high-pitched kid voice, “I’m Kurt Cobain!” because we all know how it ends.

While Cobain’s mother is prominently interviewed throughout the documentary, which at two hours and 15 minutes is too long, his father doesn’t say much and when he does he looks so uncomfortable it made me uncomfortable to watch him. And it doesn’t help that his current wife goes on and on about how Cobain was a terrible child who was shuffled from house to house and family member to family member for as long as he or she could handle him. Many of those childhood stories were told through animation that was paired with Cobain’s self-recordings. Although I think it’s cool that Cobain’s journal entries and self-recorded tapes were applied to animation, I found those scenes to be the weakest part of the documentary. Some of it seemed like unnecessary filler (trust me this film is so well-done it doesn’t need anything extra) and some of it seemed too personal to be watching. Like I had no business knowing some of the stuff I was watching and hearing. Conversely, the best parts of the film were the home videos, interviews and footage of the band performing. Watching Krist Novoselic discuss, with what seems like 20 years guilt, that he should have seen it coming when Cobain killed himself was tough. When Wendy tells the story of the first time Cobain played Nevermind for her – she explains that she said to her son, “You better buckle up because this is going to change and you’re not ready for it.” Unfortunately, she was right.

It was also interesting hearing stories from Cobain’s first girlfriend and his sister – both of whom are his biggest fans right up there with his mother. When Love comes into the picture things get weird. Although they are clearly in love, she is toxic. And while their home videos unmistakably show two junkies enabling each other, I’m not one to blame the “Yoko” in the relationship. On another note, I saw Love’s boobs way too many times. Put those things away! Things get worse when Love gets pregnant because she was using drugs during her pregnancy and the press found out about it. This puts Cobain into a tailspin of anger which he writes about fervently in his journals. Once again he refused to be ridiculed and even threatened to sue various media outlets, including Vanity Fair, for publishing an article that talks about mandatory drug tests and child services taking away their daughter.

Although I was warned that one of the toughest scenes was Cobain holding Frances while Love gives her a haircut, I still wasn’t prepared. When Love calls him out for zoning out, he complains that he’s tired and not on drugs when it’s obvious that he is nodding off due to his drug-induced haze. Also, what I’ve always thought was interesting is the lack of discussion about Cobain’s severe stomach problems which most likely led to his heroin use. While the documentary does talk about his stomach issues and the fact that he went to the doctor a few times “but it didn’t work,” I can’t help but wonder if Cobain had gotten the medical help he needed he would have celebrated his 48th birthday this year instead of the world discussing the 20-year anniversary of his death.  Two other notes: 1) Guns ‘n Roses continuously comes up throughout the film and it’s hilarious when Cobain makes little comments about how much he thinks they suck. 2) One of the most disappointing absences was Dave Grohl because I think he’s the greatest person in rock and roll and because he gives great interview. According to an article I read in Rolling Stone, Grohl’s interview was delayed due to his work on Sonic Highways so it never made the final cut.

Even though Montage of Heck is obviously Kurt Cobain’s story, ultimately it’s about the importance and relevance of family. Cobain spent his whole life trying to fix what was broken and it started with his broken home. His parents got divorced when he was young which embarrassed him and caused him to act out. He was angry and wanted to find a place where he fit in which ended up being music. Every interview he gave, with or without Nirvana, he made it painfully clear that he was not happy to be there. He didn’t want the fame but he did want the praise. So much of his journal entries and subsequently his lyrics depict someone who can’t handle ridicule – a fact reiterated by his mother, sister, Novoselic and Love. As a result, Cobain came off as an ungrateful rock star who was too cool for cool. Not the case. He was an artist who was able to turn pain into what would become legendary music.

As the film comes to a close we see Nirvana perform their now iconic MTV Unplugged concert and then we learn that while visiting Rome, Cobain found out that Love thought about cheating on him and took 67 Rohypnols which leads to him falling into a drug-induced coma. As an avid Nirvana fan, I was surprised that I didn’t know about the coma incident; especially since I definitely remember the day he died in 1994.  After five days in the hospital, he was released and then the film abruptly ends with this on the screen: “One month after returning from Rome, Kurt Cobain took his own life. He was 27 years old.” End credits.

I’m glad the film ended the way it did – when Cobain’s life ended. There were no news clips about his death, no Kurt Loder talking to MTV fans about the various Cobain vigils and no magazine covers. There was no posthumous coverage and there should not have been. If this was the story of Kurt Cobain it should finish when his life was finished. Although this was a harrowing tale of one of rock and roll’s biggest icons, it was not a cautionary tale. Instead, the film provided an inside look into how people become who they are and why they make the decisions they make and do the things they do. Cobain was a prolific writer, an exciting singer and guitarist and he loved his family. He was in awe of his daughter, who wasn’t even two years old when he died, and wanted to build a home that was different than the home he grew up in. The juxtaposition of the footage of him lying in bed with little Frances and then performing in front of tens of thousands screaming fans was interesting because the former clearly made him happy and the latter didn’t seem to faze him. In one of his journal entries he says that none of the fame is worth it for musicians if they don’t enjoy performing and then he goes on to talk about how much he loves performing. It was almost a relief to hear that he really did enjoy playing music and that writing quality songs and quality music was so important to him. He took his craft very seriously and his family was everything to him. He even mentions that if anything was going to take him away from touring it would be his daughter because he wanted to spend time with her. I wish he got the chance to do that.