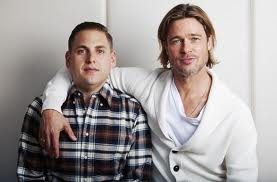 I figured this movie was going to be good because a) I love baseball movies and b) I honestly I can’t think of a Brad Pitt movie I don’t like. And before all the guys out there roll their eyes and say I like Brad Pitt movies because I like to look at Brad Pitt they are only partially right. Of course I like looking at Brad Pitt – who doesn’t? But you have to admit that in addition to eye candy he is also an amazing actor: Ocean’s 11, Legends of the Fall, Seven, Fight Club, Mr. & Mrs. Smith, Spy Game and who could forget his small but memorable roles in True Romance and Thelma & Louise.

Anyway, there is a lot more to this movie than Brad Pitt. First of all it’s a great story and best of all it’s a true story. Just like Miracle, The Blind Side and Invincible, Moneyball is amazing because it really happened. These kinds of stories are so good you can’t make them up – but you can make a movie about them and I’m so glad Hollywood did. Second of all, this movie has a lot to do with character and what it takes to do something that’s never been done before. There is a line in the movie that sums it up well: “The first guy through the wall…he always gets bloody…always.” Fair enough but having the guts to be the first takes a hell of a lot of character.

Two other reasons why this movie was amazing: 1) It was written by Aaron Sorkin (we also have him to thank for The Social Network and The West Wing). 2) Jonah Hill finally took a role that allows him to shed the sarcastic cartoon character he usually plays and embrace the role of mild mannered genius Peter Brand who is the perfect match for Pitt’s Billy Beane. To say they are an odd couple is an understatement but that worked for Tom Cruise and Cuba Gooding Jr. in Jerry Maguire and it works here. Who knew Pitt and Hill would have such chemistry?

Speaking of Jerry Maguire, one of my favorite scenes in Moneyball is when Beane is playing phone roulette with fellow baseball managers while attempting to trade a few players. It rivals Tom Cruise’s phone roulette scene in Jerry Maguire – a scene I have always thought of as one of the best in sports movie history. But one of the biggest differences between the two sports movies is that while Moneyball is about putting together a great baseball team with limited funds it’s definitely not about showing anyone the money. Which is nice.

I love that we see Beane in flashbacks as a failed baseball player who chose money and the big show rather than accepting his full ride to Stanford like he should have. I love that Beane wanted to change the game of baseball and he did. It’s heartbreaking to watch him toil over his team and even more so that he still hasn’t won a World Series with the Oakland A’s. But when he got the offer to become the GM for the Boston Red Sox – and the highest paid GM in history – he turned it down because he wanted to get it done in his town with his team. If that’s not character I don’t know what is.