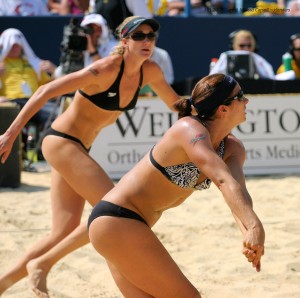 The Olympics is always full of controversy – whether it’s real uproar like athletes Tweeting racist remarks and losing their opportunity to compete or contrived craziness fueled by the Behind The Music-esque back stories that lead up to athletic segments – and that’s part of the reason why the world is captivated by these amazing few weeks every two years.

That being said, those of us who are real sports fans would much rather see athletes competing than the seemingly-endless footage about the hardships they had to go through to get where they are. I don’t mean to sound insensitive but come on – it’s the Olympics for crying out loud! Of course these athletes worked through adversity to get here – it’s supposed to be tough!

For this reason I think it’s amazing when the competition itself does in fact elicit so much excitement that it’s like watching a television show or movie that is so good you can’t take your eyes off the screen. That’s how I feel when I watch Misty May (Treanor) and Kerri Walsh (Jennings) play beach volleyball.

Slated as the most successful beach volleyball team of all time, the pair won Olympic gold in Athens (2004) and Beijing (2008). Since then Walsh gave birth to two children, May tore her Achilles, the two went their separate ways, Walsh paired up with another partner and then they reunited and battled their way back to this year’s Olympics. A dozen years after first teaming up, the pair is third in the world rankings behind Brazil’s top-ranked Larissa Franca and Juliana Silva and China’s No. 2-ranked Xue Chen and Zhang Xi.

There’s something to be said about watching a sport that you play (I played volleyball in high school and have continued to do so in adult leagues) but I don’t think that’s the only significance here. These two women play to win and they do it with grace, finesse and unbelievable athleticism. Usually people prefer to watch men’s sports (unless its gymnastics) but everyone seems to be enthralled with May and Walsh. Even at 34 and 33 years old respectively, they are dynamic, exciting, fun and a great story.

To date they have never lost a set in the Olympics – an incredible feat that they hope to continue in London. So far, so good. Each set I’ve watched has been close – May and Walsh are by no means blowing their competition out of the water – but they are winning. Fingers crossed that they continue to fight and get their third gold medal. America will be watching and cheering them on hoping to yell USA! USA! USA! when it’s all over.