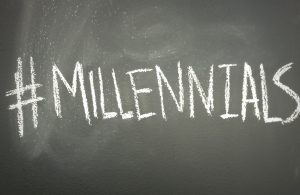 The term “Millennial” is nothing new. In 2013 TIME magazine writer Joel Stein wrote a cover story called “Millennials: The Me Me Me Generation” and Scott Hess, the Vice President of global youth research firm Insights for TRU, hosted a TEDx Talk called “Millennials: Who They Are & Why We Hate Them” in 2011. But what is new is the way the term has crept into television show plotlines. It’s also interesting that, three years later, the concept continues to make front-page magazine headlines.

While there are several ways to define a “Millennial,” according to what I’ve read, here is the basic idea:

Because I was born in 1983 I am right on the cusp of Millennial and Gen-X status. As a result, I’ve had several conversations with friends about what timeframe denote Millennial versus Gen-X. Some say it’s all about the year a person was born, while others say it depends on the year a person graduated from high school. Either way, these terms are not only a hot topic of conversation, they have also become major themes on TV shows.

Starring Joel McHale, CBS’s new comedy series The Great Indoors hasn’t even premiered yet (look for it on October 27) but is already making noise. McHale plays Jack, a Gen-X reporter for an adventure magazine called Outdoor Limits who made a name for himself by actually, physically exploring the world. Those days come to an end when the magazine’s founder switches to online-only publishing and appoints Jack in charge of the team of Millennials who have been hired as “journalists.”

Another example is the newest (33rd) season of Survivor which divides its competitors into two groups: Millennials Vs. Gen-X. For this particular show, Millennials are considered to be those born between 1984 to 1997 and Generation X are those born between 1963 to 1983. After only one episode, the most significant theme is that Gen-Xers work harder than Millennials (the former prioritize building a shelter before a storm comes while the latter spend time swimming in the ocean). From an experience standpoint, one would think that the older, Gen-X group would know more about what it means to work as a team but the Millennials won the first immunity challenge which means no one from their tribe was sent home.

Even National Geographic has something to say about Millennials! The October 2016 cover of the magazine features the headline: Back to Nature: The Selfie Generation Gets Outside with a photo of four college girls posing in Glacier National Park. The girls are topless – which I guess is supposed to signify how free-spirited they are – but the photo is taken from behind so all that it seen is their bare backs. Photographer Corey Arnold explains that he was tasked with photographing “young human beings from the Millennial generation ages 16 to 32.” The idea was to show how they have used social media to capture and share their experience visiting America’s National Parks.

While Stein’s 2013 TIME cover article defined Millennials as “lazy, entitled narcissists who still live with their parents,” it also teases with the sub-headline “they’ll save us all.” The article is interesting for several reasons but the section I found most fascinating is when Hess brings up how social media has changed the young generation’s thought process. He explains that since most reality shows are full of narcissists, it shouldn’t be surprising that Millennials act narcissists. Hess also points out how a family like the Kardashians would have never survived without Facebook, Instagram, and taking selfies which really became possible with the technology of iPhones. Valid points. When I was in high school our cell phones were Nokia bricks that rarely left the center consoles of our cars. I sent my first text message in all caps for 25 cents each when I was as sophomore in college, Facebook didn’t launch until my junior year (and only people with .edu email addresses could be part of it), and my first phone with a camera was a Motorola Razr I got when I was a senior in college. Taking photos using my iPhone has changed everything and I’m 33 – I can’t imagine what that would have been like when I was 17. I shudder.

Another excellent point made in the article is that Millennials “are not only the biggest generation we’ve ever known but maybe the last large birth grouping that will be easy to generalize about.” Before Gen-X was the Baby Boomer Generation (born 1946 to 1964) and then the Traditionalists or Silent Generation (born 1945 and before). Maybe our kids won’t even be considered a generation – maybe there will be a whole other term that hasn’t been invented yet.

Stein ends his article with something to really think about: “We have all that data about narcissism and laziness and entitlement. But a generation’s greatness isn’t determined by data; it’s determined by how they react to the challenges that befall them. And, just as important, by how we react to them. Whether you think millennials are the new greatest generation of optimistic entrepreneurs or a group of 80 million people about to implode in a dwarf star of tears when their expectations are unmet depends largely on how you view change. Me, I choose to believe in the children. God knows they do.”