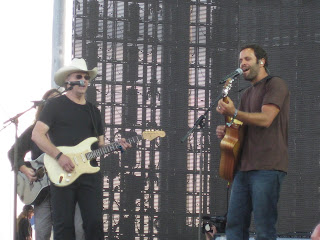 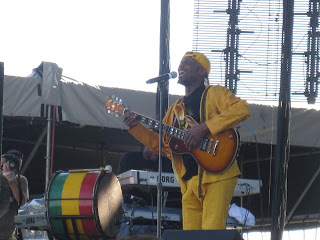 MHMF finally found its stride this summer after a few missteps over the past two years. In its inaugural year (2008) our fair city’s first musical festival boasted huge names like the Black Crowes, Dave Matthews Band, Steve Winwood and the incredible Tom Petty. Unfortunately the event took place on the two hottest days of the summer which resulted in exhaustion, dehydration and two very long days. There were also some organizational issues that needed to be addressed and the general layout of the venue was not particularly done well. That being said, the festival was a success due the level of talent that was booked.

Unfortunately, the next year (2009) the festival promoters did not make smart choices when booking the talent. The headliners were hippy dippy jam band Widespread Panic and mosh or die metal band Tool. To be fair, both bands have a ton of fans but the fans couldn’t be more different which is a problem when you’re trying to have a cohesive group of people attend a two day festival. The numbers didn’t lie and the second year of MHMF was nowhere near as successful as the first.

When this year’s lineup was released I was very curious to see if the promoters learned from their mistakes. When I saw that the two headliners were Dave Matthews Band (making a return from 2008) and Jack Johnson I was less than impressed. Although DMB and Jack Johnson are extremely talented I had seen both acts several times before and initially didn’t think I would be attending. Then, upon closer inspection, I realized that there were a ton of acts worth seeing including Steve Miller Band (a group I’ve wanted to see for years), Train, Cypress Hill, the Samples, Jimmy Cliff and Weezer. So we decided we wanted to go and my Mom was kind enough to not only get us tickets but to get us VIP tickets. VIP was definitely the way to go as it allowed us to park closer, provided several shaded tents, air conditioned bathrooms (worth every penny), a cell phone charging station, plush seating, reduced food and drink prices and most importantly, the ability to get extremely close to the main stage music acts. It also provided a relaxing home base to come back to after exploring the rest of the festival grounds. Thanks again Mom!

On Saturday, the Samples were a great old school way to kick off the festival and it was fun seeing Blues Traveler’s John Popper play harmonica for one song. (Rod and I would end up meeting him later that night at our local bar, Bull & Bush). Cypress Hill was a surprisingly fun as they played hits like “Insane In The Brain,” “Hits From The Bong” and “Dr. Greenthumb.” True to form they made a huge spectacle about marijuana as they smoked huge joints and pulled out a bong that was over six feet high. Steve Miller Band put on an amazing show, playing all the classics like “Take The Money And Run,” “Abracadabra,” “Living In The U.S.A,” “Fly Like An Eagle” and “Rock’n Me.” Jack Johnson joined them for “The Joker” and then they encored with “Jungle Love.”

On Sunday, our day began with reggae legend Jimmy Cliff who looked extremely happy to be at MHMF as he treated us to gems like “The Harder They Come” and “I Can See Clearly Now.” We then watched Train belt out their hits such as “Meet Virginia” and “Drops Of Jupiter,” along with some new songs. Charismatic lead singer Patrick Monahan sang like his life depended on it and the large crowd that had made their way to the Wolf Stage to see them were more than pleased. Punk rock band Weezer was next and they also put on a show to remember full of favorites like “Buddy Holly,” “The Sweater Song” and my personal favorite “Say It Ain’t So.” There were considerably more people at the event on Sunday there were on Saturday, something that happened in 2008 as well.

In addition to some unforgettable music the logistics of MHMF were much better this year than they were in 2008. The stages, tents, vendors and booths were better positioned and were all closer together leaving less dead space in the middle of the festival. It also helped that the event was scheduled in the middle of August rather than the middle of July which gave us temperatures that were 20 degrees cooler. One aspect that I was glad didn’t change is one of the biggest reasons we attend music festivals: the impromptu collaborations between artists that normally would not happen. Seeing John Popper jump in with the Samples and Jack Johnson singing with Steve Miller Band was very cool. And I’m sure I’ll never see it again.

All things considered, 2010 was a great year for MHMF – maybe even the best year yet. As long as the promoters continue to attract top notch acts and as long as the amenities and the set up continue to be stellar then MHMF will be around a long time. We are lucky to have our very own music festival in our backyard so hopefully that continues to be the case. Because there is no way in hell I’m going to Bonnaroo.