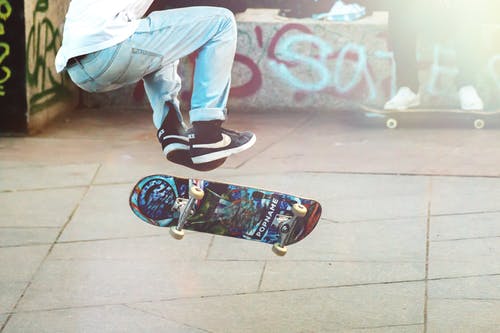 Although I don’t skateboard, I’ve always been interested in the history and culture of a “sport” that basically found popularity in the 1970s when a bunch of young surf kids in Southern California needed something to do when there were no waves. The members of the Zephyr skate team were so talented that skateboarding quickly changed from a renegade sport to a pop culture phenomenon. Pioneering efforts of skateboarders like Stacy Peralta, Tony Alva, and Jay Adams spawned generations of kids to become part of the counterculture that is and continues to be skateboarding.

And that’s exactly what Mid90s, the 2018 film written and directed by Jonah Hill (yes that Jonah Hill), is all about. Taking place in Los Angeles, Hill’s directorial debut is shot, literally and figuratively, through a 1990s lense. While the movie reminds me of the film Kids in terms of the rawness of the subject matter and authenticity of the dialogue, the plot follows a 13-year-old kid named Stevie who is thoughtful, kind, and shy – and looking for a new crew to hang out with. He’s sick of his older brother, who wears Polo Sport shirts, beats him up, and for some reason is obsessed with orange juice, and his single mom who is sweet but also treats both her sons more like friends than her children. Stevie starts hanging out with a mostly older group of skateboard kids who bring him into their inner delinquent circle which he finds fascinating.

While his new crew consists of reckless kids who smoke, drink, and have misogynistic and homophobic conversations to try to be cool, they do care about one another. Ray, the eldest kid in the group, functions as Stevie’s mentor and is, other than Stevie, definitely the best character in the film. He cares more about skating than getting high and instead of telling Stevie that “saying thank you is gay,” he says that it’s actually “common manners.” But he still can land a sick kickflip. See! Skateboarders aren’t so bad!

Ray is played by Na-kel Smith who reminds the audience that there is more to skateboarding than meets the eye and I appreciate that. Without him, the film would feel more like a cautionary tale. Also, the actor who plays Stevie, Sunny Suljic, is solid gold. His shaggy hair, piercing blue eyes, and expressive face make it so he doesn’t have to say much. The audience can feel his awkward but genuine efforts to fit in and be part of something that he can’t resist.

A few of my favorite lines:

Ray: A lot of the time we feel that our lives the worst, but I think that if you looked in anybody else’s closet, you wouldn’t trade your shit for their shit. So let’s go.

[Conversation after Stevie lands in the hospital after a horrible car wreck]:

Ray: Are you okay?

Ray: You literally take the hardest hits out of anybody I’d ever seen in my life. You know you don’t have to do that, right?

Even if you’re not a fan of skateboarding, Mid90s is worth watching for its candidness and nostalgia – especially for anyone in their 30s or 40s who was looking for a change at a young age. I watched the movie with my significant other who also grew up in Southern California, had an older brother, and found skateboarding to be a creative and fun outlet that came with a crew of buddies. Their behavior wasn’t as hardcore as what’s depicted in the film, which is probably a good thing, but a love of skateboarding turned into a love of surfing which turned into a passion for snowboarding that ultimately changed the trajectory of his life. If that’s not a sport to be reckoned with, I don’t know what is.