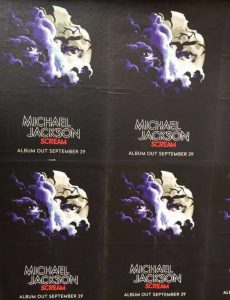 Although releasing  albums following an artist’s death is nothing new, some are better handled than others. I think the reasons behind these releases play a huge role in each album’s success – for example is the music coming out so the estate and/or record company can make money or is it because the artist has a ton of unreleased material that the fans need to hear? Also, timing is a huge issue – i.e. are previously released, repackaged songs hitting iTunes to capitalize on an untimely death or the anniversary of a death or is the timeframe more about the estate and/or record company getting their legal ducks in a row?

While some members of the public don’t care about the reasoning – they just want more music from their favorite artists – others do care and won’t spend the money on songs they may already have on vinyl, cassette, CD, and digital formats.

A few examples of posthumous albums:

At the end of this month, Epic/Legacy Recordings and Michael Jackson’s estate will release Scream, “a new compilation of Jackson’s ‘most electrifying and danceable tracks.’” Although the album bears the same name as the 1995 song famously sung by both Michael and Janet Jackson, the album title has nothing to do with the song. Instead, it included tracks from MJ’s biggest albums including Thriller, Bad, Dangerous, and HIStory: Past, Present and Future, among others.

In their official statement, Epic/Legacy Recordings explained that “the choice of tracks for Scream reflects the King of Pop’s affection for this time of the year and its themes of costumes and disguise, darkness and light, character transformations and surprise.” Whatever that means. Because the sole piece of new music on this album is “Blood on the Dance Floor X Dangerous,” which is a bonus mash-up put together by production duo The White Panda, I’m having a hard time believing that MJ would have wanted something like this released. Clearly we’ll never know so the question is why should the public care about this “new” album? I’m a huge Michael Jackson fan but I’m not sure I need another version of “Dirty Diana,” “Dangerous,” or “Thriller.” Also, this release is coming eight years after his death – why now?

All that being said, I just listened to “Blood on the Dance Floor X Dangerous” and it’s a lot better than I anticipated. I thought it would be some kind of EDM shit show but MJ’s voice sounds good and although I prefer his more guitar-heavy songs, this five-song mashup of “Blood on the Dance Floor,” “Dangerous,” “This Place Hotel,” “Leave Me Alone” and “Is It Scary” is pretty catchy. But don’t kid yourselves – there are more Jackson estate projects coming soon!  The CD and glow-in-the-dark vinyl versions of Scream are slated for an October 27 release and Thriller 3D is supposed to premiere this week at the 74th annual Venice Film Festival.