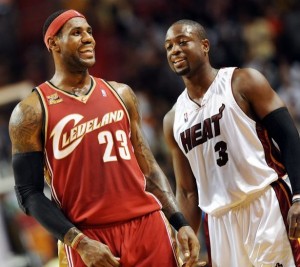 According to SportsIllustrated.com, when LeBron James returns to Miami on Christmas Day (tomorrow) clad in a Cleveland Cavaliers jersey, the Miami Heat plan to honor him during pre-game festivities. What??? Since when does the Heat honor players who became former players only four months prior? I know that LeBron spearheaded the back-to-back championship wins for the Heat but guess what? LeBron no longer plays for the Heat. He went back to his homeland aka Cleveland which means he will be the opponent tomorrow, not some former player coming back after many years to receive some kind of award.

Clearly, the Cavaliers are playing the Heat on Christmas for ratings and ratings only but that doesn’t mean that the Miami Heat franchise needs to make a huge spectacle of LeBron. When did Miami get soft? Last time I checked the Heat doesn’t play tribute videos for players who switched teams in July and then plan on suiting up to dunk on former teammates on Christmas. If the Heat are going to put together a tribute they should do it for the Tim Hardaways and the Alonzo Mournings of the world –  i.e. retired players who are coming back to visit as spectators.

Maybe this video is a sneaky way for the Heat to put LeBron in an emotional state and distract him from the task at hand which is obviously winning. Maybe the video is meant to add to the pressure of playing against his former teammates and coaches in his former Arena as America watches.

It will be interesting to see how Heat fans react to these video shenanigans. I’ve attended many Heat games on Christmas and they are no joke. Don’t let those festively-dressed fans fool you – they are out for blood on Christmas and want their team to win. Miami ticket-holders attend the big Christmas game to kick off their evening and a loss just will not do. So good luck with the video Heat personnel – I can’t imagine what kind of response it will elicit but I’m sure we’ll be reading about it on December 26.