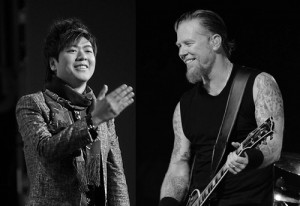 There are many reasons why the Grammy Awards are billed as “music’s biggest night” and most of them have to do with mind-blowing performances and collaborations by music’s biggest names. Exemplifying the range of these performances, on January 26 Metallica will play their Grammy award-winning song “One” with Chinese concert pianist Lang Lang. Yep, you read that right.

How can you not look forward to a hard core metal band collaborating with a concert pianist? Especially since Lang Lang has performed with leading orchestras in Europe, the United States and China and if often referred to as the “hottest classical music figure” since 1999.

Why does this performance have the potential to be a big deal? Because collaborations of this caliber only happen on a huge stage like the Grammys which is why music fans watch every year.

Three of my favorite Grammy collaborations from the last 10 years:

Beyoncé & Prince – 2004: Talk about two unforgettable entertainers. Although 2004 doesn’t sound like that long ago it’s actually been a decade since these two shared the Grammy stage. At that point Beyoncé had just released her debut solo album a year prior so when she came out and joined Prince in “Purple Rain” it was like two powerhouses coming together that should have been performing together for years. A medley of Prince hits came next and I honestly don’t know who stomped that stage harder. It was amazing.

Melissa Etheridge & Joss Stone – 2005: Honoring Janis Joplin has never sounded so gutsy, fearless and soulful. Stone, barefoot and bohemian as usual, destroyed a rendition of “Cry Baby” that would have made Joplin proud. Then, coming back for her first performance since being diagnosed with breast cancer one year earlier, a bald and beautiful Etheridge clawed her way through “Piece of My Heart” with such conviction it’s no wonder the song shot up the charts.

Lady Gaga & Elton John – 2010: Clad in a glittering green alien jumpsuit leotard (obviously), Lady Gaga put down the crazy and played dueling pianos with the legendary Elton John. They combined her song “Speechless” and his classic ballad “Your Song” and blew the roof off the theatre. And they were just the opening act. Four years later the video still gives me chills.

So back to Metallica. Clearly they are looking for a big Grammy moment and it sounds like they are going to get it. Over seven minutes long, “One” is loud, intense and unapologetic- much like Metallica – and I think that inserting a professional like Lang Lang might be just the thing to set them apart on music’s biggest night and bring their music back to the minds and ears of the general public.